Husband Gives Wife a Kidney for their Anniversary

Published on February 8, 2017by Kelly Vance

Forget flowers, jewelry and a fancy dinner – what Cindy Chafian really wanted for her 20th wedding anniversary was a new kidney.

Actually, it was her husband Scott, who really wanted to give her one. Cindy took some convincing.
She’d turned down his offer before but as her condition worsened, she finally accepted and they celebrated their 20th wedding anniversary in the hospital together, both recovering from the transplant surgery. 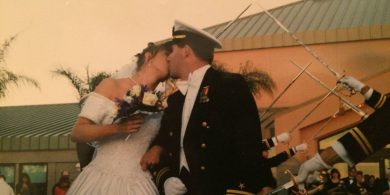 Twenty years and counting
Scott and Cindy met a quarter century ago (they’ve been together for so long, Cindy said it’s hard to remember whether it’s 24 or 25 years) while Scott was stationed in Long Beach, Calif. with the U.S. Navy.

They married 20 years ago and had five children, now 13, 15, 17, 23 and 25. Scott stayed in the Navy and they eventually landed in Suffolk. Scott retired from the Navy three years ago and now works as a project manager for a private company. Cindy has been a stay-at-home mom since their third child was born.

Everything was great. Until Cindy’s kidneys started failing from polycystic kidney disease.

“I was first put on the transplant list four or five years ago,” she said. “Scott had always said that if he was a match, of course he would donate but at that point, I wasn’t in the mindset. I just wasn’t ready for him to do that.” 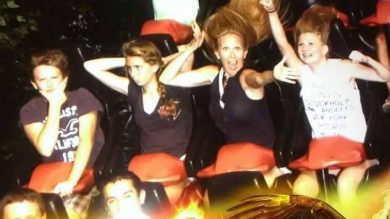 Cindy and her kids at an amusement park.

But she kept getting sicker. She had several surgeries, went on dialysis and still continued to decline.
“It wasn’t until my right kidney had completely shut down, last October, that I couldn’t do it anymore and I said ‘I’m ready,’ she said.

Scott was more than ready. They already knew he was a match and after watching his wife suffer for years, he was eager to jump into action.

In sickness and in health
Scott and Cindy checked into Norfolk Sentara hospital and on Jan. 24, the day before their 20th wedding anniversary, doctors moved a kidney from Scott to Cindy.

“The kids went through the normal range of emotions you’d expect having both parents go through major surgery. They were excited that it was happening but also really afraid.”

The next day, the transplant team wheeled Scott over to Cindy’s room and threw them a hospital anniversary party, complete with a cake, flowers and sparkling cider. 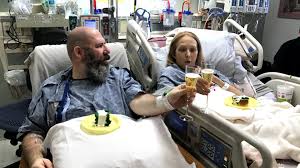 The Chafians celebrate 20 years and a successful transplant.

The couple said their children handled the entire thing with extraordinary courage.

“The kids went through the normal range of emotions you’d expect having both parents go through major surgery,” Cindy said. “They were excited that it was happening but also really afraid. They’ve been great through the whole thing.”

“It’s obviously painful having any type of abdominal surgery but by now it’s just uncomfortable,” he said.

He expects to be out of work a total of 4-6 weeks and said his company has been very generous in giving him time off above what’s required by the Family and Medical Leave Act.

To help pay the medical bills and make up for Scott’s time off work, a friend launched a GoFundMe page , strangers, family and friends have been donating to the cause.

Cindy’s recovery has been harder than Scott’s. Just after being released from the hospital, she developed an infection and went back in again. Finally home two weeks after the surgery, she’s doing much better, but still has a long way to go.

Camaraderie and fame
Just before the surgery, Scott and Cindy’s story was picked up nationally. They didn’t realize how many people had seen it until they got recognized at the clinic on a follow-up visit after the surgery.

“It’s hard to miss Scott,” Cindy said. “He’s got this big beard. A woman asked if we were the couple from television.”

They said they expect that other transplant families – particularly inclined to pay attention to stories like theirs, may end up recognizing them too.

Mostly, Scott said, it was nice to be at the clinic and talk to other kidney recipients.

“I knew as soon as I got tested that I wanted to do this.”

“One of the couples, the husband had also donated to the wife,” he said. “It was really nice to be able to talk to people who have been through the same things we have, just a few months further out.”
Asked whether they wished they’d done it sooner, Scott didn’t hesitate. 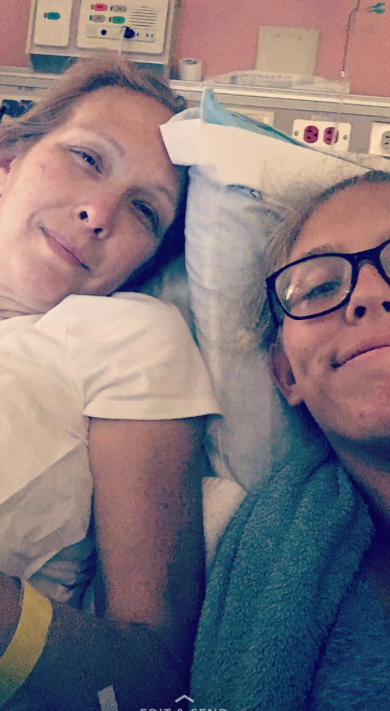 Cindy post-surgery with her daughter, Katie.

The only hesitation he had was that if Cindy could get a deceased donor kidney instead, his was still available as a backup in case anything went wrong. But as she got sicker, he said, he wasn’t willing to wait.

For her part, Cindy said she’s not sure.

“It’s still so close,” she said. “I can’t even consider now whether I’d rather have done it sooner. Maybe after I get better, with the benefit of hindsight I will wish I had. But everything happens in its time.”

A gift of love

“I really loved him before,” she said through tears. “But I don’t think I loved him nearly as much as I do now.”

“It gave me a deeper appreciation for how strong she is,” he said. “I didn’t think I could deepen my respect for her any more, but I did.”

For her part, Cindy said the experience has brought them closer together.

“I really loved him before,” she said through tears. “But I don’t think I loved him nearly as much as I do now. After all of this, he says ‘I love you’ and I say ‘I’m pretty sure I know you love me. I’m just trying to figure out how to show you I love you just as much.’”