Published on August 1, 2016by Kelly Vance

It’s one thing to donate an organ – it’s another thing entirely to share one.

That’s what Tammy Blackwell and her brother, Chuck Parsons, are doing – sharing the same liver.

The liver is the only human organ that can regenerate from just a piece, so when Tammy needed a new liver, transplant doctors at the University of Virginia removed hers entirely and replaced it with a piece of Chuck’s. Now both of them are growing whole new livers from the two halves of Chuck’s old one.

It all started back in 2008 when Tammy, now 42, had her gallbladder removed. That simple outpatient procedure ended with bad news – during the operation, doctors found that her liver was failing due to cirrhosis.

“They told me I had cirrhosis of the liver and I said ‘No, I don’t! I don’t drink! I don’t have cirrhosis!’” she said. But alcoholism isn’t the only cause of cirrhosis, as Tammy soon learned.

They told me I had cirrhosis of the liver and I said ‘No, I don’t! I don’t drink! I don’t have cirrhosis!’

In her case, it was caused by her diseased gallbladder. When her gallbladder stopped functioning properly, things got backed up, putting pressure on her liver, which in turn began to fail.

The reason why is that she’d been taking care of everyone else.

No care for the caretaker 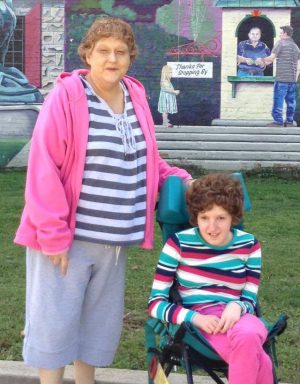 Tammy’s oldest child, Rhianna, suffers from lissencephaly, a terminal brain defect. When she was diagnosed, doctors said Rhianna wouldn’t live past the age of 2.

She’s 17 now, but with the brain function of a baby.

“Taking care of her has been my life,” Tammy said. “I try not to keep her in a bubble but if she gets sick, it could kill her. And she’s so big now, it’s hard to go out.”
So Tammy stayed home for years, providing round-the-clock total care for her daughter and then for her two sons, Austin and Cannon – now teenagers.
All the time, she was getting sicker and sicker, without realizing it.

After she was diagnosed in 2008, Tammy maintained her family and her health for awhile. But her liver was too damaged to heal and she began to falter over the next few years.

“About two years ago, I started getting really close to death,” she said. “I was in the hospital more than I was home.”

When she was at home, she was in too much pain to even walk across the room. Her partner, Will, took care of Rhianna, Austin, Cannon, and Tammy, who was moving steadily towards death as her liver shut down.

And then everything changed.

Big brother to the rescue

In November 2015, Tammy was talking to her brother, Chuck, about the wait for a donated liver.

“She mentioned briefly on the phone that she was also eligible for a living donor organ and I asked her what that meant,” said Chuck, 46. “I didn’t know – I think most people don’t know – that you can donate part of your liver while you’re alive.”

“A living donor is someone who donates an organ or part of an organ,” said Bonnie Farone, Transplant Services coordinator at the University of Virginia. “A person can donate a kidney or a portion of their liver and the liver will regenerate, returning to original size within several weeks to months.”

Chuck called the Strickler Transplant Center at UVA and they interviewed him over the phone to be sure he was healthy enough to donate. He then made the five-hour trip to UVA for lab and imaging tests, plus a full evaluation by a doctor, surgeon, nurse practitioner, social worker and psychologist. 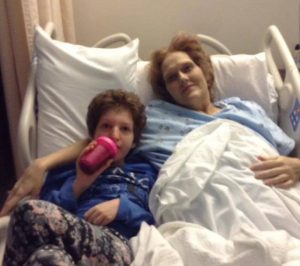 The entire process took several months but by early June 2016, Chuck was waiting for the call that would tell him whether he’d been approved as a living donor.

Tammy was waiting too, knowing Chuck would call her as soon as he had news.

She was still waiting for her phone to ring when he showed up unexpectedly on her front door.

“He lives 10 hours away,” she said. “He drove all the way to surprise me and tell me in person that we were going to do it. He said ‘That’s not something you tell someone over the phone.’”

On the day of the surgery, both families made their way to UVA. Chuck’s wife, Niki, told him later that his daughter, a Liberty University student, cried hard when they wheeled him back for the surgery, but that both his wife and daughter were supportive from the beginning.

“Obviously, it’s major surgery, but it’s relatively safe overall,” he said. “Looking back now, five weeks out, it was certainly easier and better than I’d expected.”

For Tammy, the results were immediate.

“It’s amazing the change afterward,” she said. “I felt better right away.”
Tammy and Chuck were both expected to need five or six days for recovery but Chuck, an ultra-marathon runner and fitness buff, recovered in half the time and was out in two.

By the first week of August, he was expecting his doctor’s clearance to get back to work – and to running.

Considering it was major surgery, “it was a great experience,” Chuck said. “I’d do it again in a heartbeat if I had to.”

As for Tammy, five weeks after the surgery, she said it was hard remembering that she was still technically in recovery.

“I’m still not supposed to lift anything that weighs more than a gallon of milk but now that I feel better, I want to start doing stuff,” she said.

But she too, is expecting clearance from her doctor to start moving again. Her main goal now is to start working on the fixer-upper house she and Will bought last year.