Superhero: How the Gift of Life Saved a Family Again and Again

Published on April 9, 2017by Kelly Vance

They say that the things you go through make you stronger. For David Edmondson, Meghan Hodgins, and their daughter, Kyndall, this strength would double, then triple, and then prove to be a seemingly indestructible force against whatever life could throw at them. 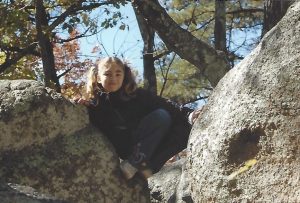 And life has thrown a lot their way. Kyndall, now 18 years old, was diagnosed with malformed ureters at the age of six months. For too long, the infant had been suffering urine backup into her kidneys, which ultimately destroyed their functionality. Her birth mother was the source of Kyndall’s first transplant at only 2 1/2 years of age, after a year of living without a kidney.

Meghan, her adoptive mother, had been recently divorced when she met Kyndall. She was looking for a daughter to raise and, as a special ed teacher, felt equipped to handle a challenging situation. Kyndall was five, with an eight-year-old brother, Kenny, who Meghan couldn’t resist welcoming into her family as well. The kidney transplant had gone well—so well in fact that Kyndall became a curious, active child with a propensity for dancing and a deep connection to nature.

The kidney transplant had gone well—so well in fact that Kyndall became a curious, active child with a propensity for dancing and a deep connection to nature.

At age 11, Kyndall competed in her first Transplant Games in Wisconsin in 2010.She swam both a 50 meter freestyle and backstroke that day, as her mom and their new friend David Edmondson cheered from the sidelines.

David, a heart transplant recipient, had been born with two holes in his heart. As an adult, his health began to decline, and he was saved by the heart of a donor,Toni Lee Bryson, whose family with whom he remains in touch with. He’d joined Team Virginia to express his support of organ donation and also simply because it looked like a fun competition. 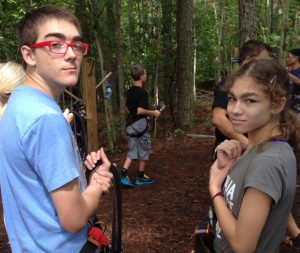 Not that either David, Kyndall, or Meghan could know that they’d walk away from the Games with a new family.

It wasn’t instantaneous, but it was close. After meeting Meghan and Kyndall in Wisconsin, David reached out to them on Facebook and soon found himself in Virginia Beach, where they lived with Kenny. They spent a Saturday together that Labor Day weekend in 2010, “and then every weekend after that,” recalls David.

Their natural affinity was clear to anyone who spent even a few moments with them, and they hadn’t joined forces a moment too soon, as the family had yet to face their most challenging trial.

Six weeks later, David and Meghan were engaged, back in Wisconsin, where they had traveled to attend the funeral of Meghan’s mother. She’d been with the family at those 2010 Wisconsin games, and because of her adoptive granddaughter’s life-changing kidney transplant, had known the value of that particular kind of gift. After her unexpected passing, Kyndall’s grandmother had her own corneas donated. 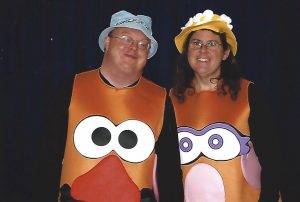 By April of 2011, it was official. David and Meghan were married—joined together by a similar outlook on life and the strength that comes from having survived difficult times. Their natural affinity was clear to anyone who spent even a few moments with them, and they hadn’t joined forces a moment too soon, as the family had yet to face their most challenging trial.

Kyndall was no stranger to sickness. As her mother says, “Getting a new organ is a treatment, not a cure,” and various ailments had a tendency to put Kyndall in the hospital throughout her childhood, including a particularly terrifying year when a reaction to medication brought on seizures and a loss of her language function. 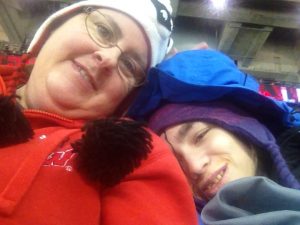 But at the time of David and Meghan’s marriage, Kyndall’s body had begun to reject her original kidney transplant. She struggled with anemia, and her low energy made traditional school a challenge. A freshman in high school, Kyndall began schooling at home. With two educator parents, this seemed like a logical solution, but it didn’t solve everything. The family watched her lose more and more of herself every day as her appetite decreased until it was nonexistent.

It was the starting pistol to what Meghan would go on to describe as “their marathon year.” Nothing seemed to be working for Kyndall, whose body was presenting new challenges daily.

While at a surgical consultation for Kyndall, Meghan noticed that Kyndall’s feet were so swollen that she appeared to be wearing “at least 10 pairs of socks.” They left the consultation and went straight to the CHKD kidney clinic, which, fortunately, was on the same floor around the corner at the hospital. Preparations for emergency hemodialysis began straightaway. 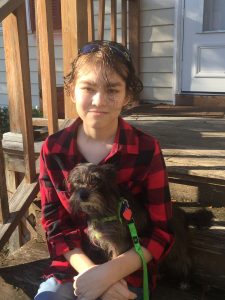 It was the starting pistol to what Meghan would go on to describe as “their marathon year.” Nothing seemed to be working for Kyndall, whose body was presenting new challenges daily. Her hemoglobin dropped, and she received transfusions. Biopsies showed that her bone marrow wasn’t functioning correctly. Nothing was making sense, and the general consensus was that her young body was reacting as if it was dying, due to a basically non-functioning kidney. That kidney had to come out.

For the second time in her life, Kyndall was living with zero kidneys. The resulting stoppage of immunosuppressants gave rise to a whole host of other disorders as her immune system went into overdrive: pancreatitis and colitis plagued the teenager, who would end up spending more than 95 consecutive days in the hospital. Her blood carried fungal and bacterial infections, and she struggled to get any nutrition at all.

Then one day, Meghan had had enough. As David remembers, she stepped in and decided “We’re going to fix this.”

For the second time in her life, Kyndall was living with zero kidneys.

Her background as a behavior analyst served her well as she collected all of her daughter’s medical records and started plotting out graphs, putting in phase change lines that tracked bodily reactions after surgeries. Meghan sat down with David and the doctors, and together they worked out three hypotheses. 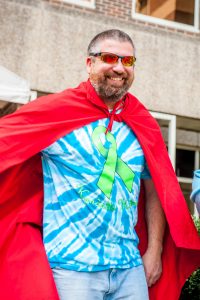 At that point, Kyndall was simply too ill to receive an organ transplant, but thanks to the doctors’ willingness to review Meghan’s graphs, a new course of treatment helped her health become a little more stable. She was eating, she was gaining a little weight, and she looked healthier than she had in months. A second kidney transplant seemed to be less of a dream and more of a reality.

David and Meghan looked over their options and put out a soft call for living donors among
their relatives. Family had served them so well up until this point, what could giving out the information hurt, so long as they weren’t pressuring anybody to make such a serious decision? The two distributed information on being tested, encouraging anyone who was willing and interested to go see if they might possibly be a match. From there, they could only hope that they’d get good news. They weren’t sure if anyone would even take even the initial step, but they soon discovered that all of David’s brothers had begun the process.

It was Luke Edmondson who texted one day and said, “I’m a match, I’m going for more tests.”

Luke was a perfect match to Kyndall on the first tier of matchable criteria, and then on the second. Once Kyndall’s blood started functioning more normally, he met her on the third tier as well. Time seemed to crawl as the family waited for the results, the decisions, and the right moments to act. 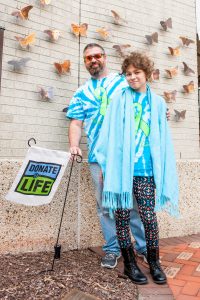 Kyndally with her uncle, and living donor, Luke.

Finally, on March 28, 2017, Luke lay in Norfolk General Hospital with his adoptive niece across a footbridge at the Children’s Hospital of the King’s Daughters. His kidney made that journey across the bridge, spending less than an hour outside his body before it was transferred to Kyndall’s.

A few hours later, Luke called to say he was taking a walk around his hospital wing. How was Kyndall responding so soon after the transplant?

David celebrates the anniversary of his heart transplant as a second birthday, joking that he turns nine on June 22. He and Meghan plan to celebrate Luke’s gift to Kyndall similarly.

“It feels like we have our daughter back,” says Meghan from the hospital room, where she watches her daughter sit up and eat lunch—a simple scene that the rest of us take for granted. At Kyndall’s request, they’ve had a superhero cape made for Luke, the latest in a line of organ donors that have saved the people they love. 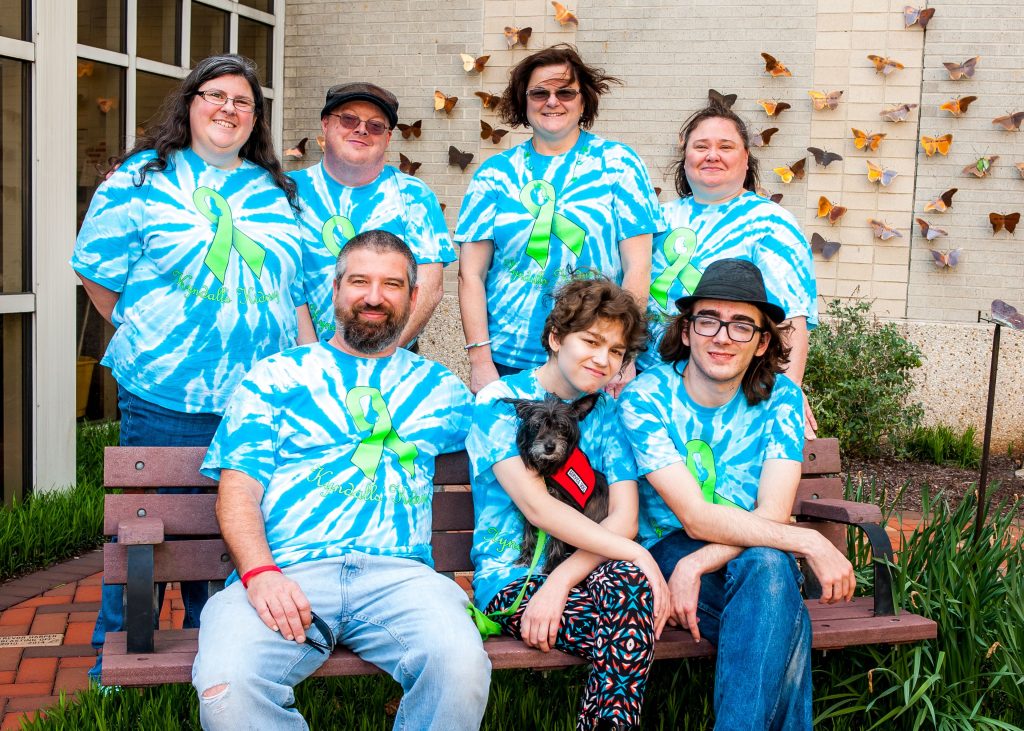