I love you with all my liver

At 18, Rutger Scott is a budding filmmaker and actor who just graduated from Kettle Run High School in Warrenton and is headed to New York University to study acting.

He’s on the precipice of a new chapter of his life; one where he’ll start becoming the man and the artist he wants to be. It’s exhilarating and scary and so incredibly exciting.

Ten years ago, Rutger was a happy, healthy, normal third-grade boy. He loved football, watching Star Wars with his sister and brothers, and was already dreaming of growing up to be in the movies.

The first time Rutger got sick, they blamed it on some bad Chinese food. Over the next week, when it kept happening, his parents figured it was just a stomach bug that was going around. After all, he was 8-and-a-half and in school. Normal kid stuff, nothing to worry about.

“They told us after about four hours of being there that he was going to need a transplant within three to five days or he wouldn’t survive.”

Then, one day, Rutger came home from third grade, and his mom noticed that he was completely yellow – down to the whites of his eyes. It was jaundice. His liver was failing.

After that, it all happened fast. 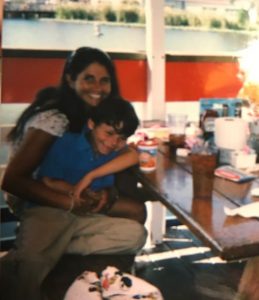 A young Rutger Scott with his mother, Tanya.

“We went to Georgetown Hospital, and they told us after about four hours of being there that he was going to need a transplant within three to five days or he wouldn’t survive,” said Tanya Scott, Rutger’s mom. “It was like one of those bad dreams where you’re running down a hallway and it’s never-ending and you can’t get out. It was a horrible few minutes of my life that felt like days and months and weeks.”

The liver that saved his life

Ten years ago, Cale Kastanek was a 28-year-old with a taste for adventure. He was a professional pilot and an avid racecar driver. He loved seeing his favorite team, the Pittsburgh Steelers, play live and hanging out with his three siblings.

Cale was only 28 years old when he died as the result of a race car accident on a track in Summit Point, West Virginia, on November 10, 2008. As his final act, Cale saved Rutger’s life. He’s the reason Rutger lived to see his ninth birthday and he’s the reason Rutger is the man he is today.

The day after Cale died, on November 11, 2008, at 9:00 a.m., after just days on the transplant list, Rutger went into surgery and received the liver that saved his life.

“We touch his liver almost every day,” said Tanya. “It’s Cale’s. It’s Rutger’s. Since Cale was 28 years old, we always claim that Rutger is the oldest kid in the family now. He knows that his life is a wonderful gift, and he lives to the fullest. He honors his life and he honors the liver that gave him life.”

“One of the hardest things I’ve ever done”

Tanya knew she had to find a way to get in touch with Cale’s family to let them know what Cale had done for them. 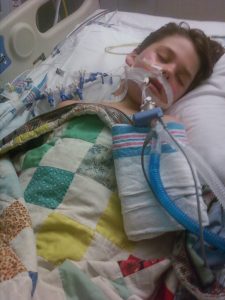 Rutger was in the 3rd grade when he suddenly fell ill.

She wanted to tell them that while she couldn’t imagine the grief they were feeling, she hoped they knew that Rutger would honor Cale every day of his life by caring for himself, pursuing his passions, and remembering that he always carries a part of Cale with him.

“We touch his liver almost every day.”

“One of the hardest things I’ve ever done in my life was writing that letter,” said Tanya. “You’re so incredibly thankful for the gift you received, but you also remember the great loss that they suffered so that you could receive this gift. It took me weeks to write that letter. I could barely get through it.”

Finally, she was ready. Tanya reached out to the Washington Regional Transplant Community, and they got in touch with Cale’s family to ask if they were open to hearing from the transplant recipient’s family. Luckily, they were ready to read Tanya’s letter.

Ever since, the Scotts have maintained an unbreakable bond with the Kastanek and Young (Cale’s step-father and step-siblings) families. 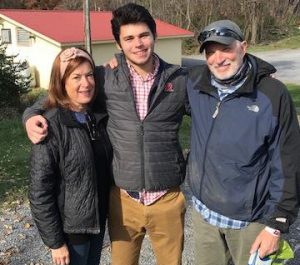 Rutger with Shirley and Jeffrey Young.

“Cale’s mom and I started sending letters back and forth,” said Tanya. “Then it went to emails back and forth, then texts, then phone calls, and then we were able to meet them at the second annual memorial laps that they have for Cale every year at the raceway. We’ve been every year since.”

As their friendship deepened, Tanya and Cale’s mother, Shirley, found out that Cale and Rutger share more than just a liver.

“It’s amazing to see how much our two heroes, Rutger and Cale, have in common,” said Tanya. “They both won the equivalent of the American Legion award in fifth grade, which is voted on by your teachers and your peers and awarded to one male and one female student. They both won this same type of award that shows great humanity and character and leadership and scholarship.” 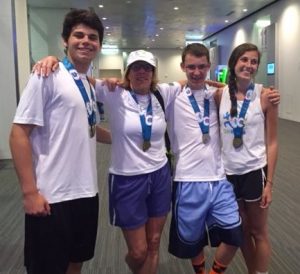 Rutger and teammates at the US Transplant Games.

Every year since recovering from the transplant, Rutger has participated in the Transplant Games, a full day of activities and athletic events where transplant recipients, donors, and their families gather to have fun and celebrate the incredible donors that have made their lives possible.

“There’s a great unity in it all,” said Rutger. “I’m there with people who have gone through many of the same operations as I have. At home, I usually feel pretty alone because I don’t know anyone in my entire community who has been through a transplant. Being surrounded by hundreds of people who have had transplants, it’s very unifying. It’s great to not feel alone.

“It’s amazing to see how much our two heroes, Rutger and Cale, have in common.”

“The competition gets very heated. You’d think that them being transplant recipients they’d get winded easier, but they go just as hard. If you win, you’re applauded, and if you lose, you’re applauded. No matter what you do or how you compete, you’re supported by the transplant community there.” 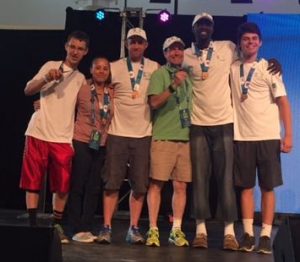 Rutger and his team claim the bronze medal for trivia at the 2016 Transplant Games.

Rutger is a talented sprinter and usually runs the 50 or 100-meter sprints and plays in the Donor Games basketball tournament.

At this year’s games, Rutger was a part of a trivia challenge team that won a bronze medal due in no small part to Rutger’s extensive knowledge of film.

“That’s always been what has connected me and my siblings,” said Rutger. “We’ve always loved movies, especially Star Wars. The thought of being in a movie has always appealed to me and making movies seems even better. It was always an escape for me after the transplant. I love that about it.”

Rutger has big plans for his life. In August, he starts at NYU’s Tisch School of the Arts, where he’ll study acting and chase his dream of making his own movies one day.

“The thought of being in a movie has always appealed to me and making movies seems even better. It was always an escape for me after the transplant. I love that about it.”

He’s already made a short documentary about his transplant experience for a high school film class. It focuses almost completely on his unwavering gratitude and love for his mother.

“I think about Cale all the time.” 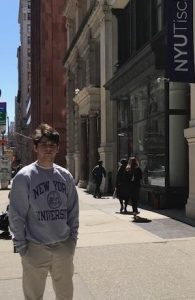 Rutger will start classes at NYU in the fall.

“This documentary is not an examination of the pain I went through to be here today, but a study of the motivation and trepidation that consumed the person who stood by my hospital bed every night of those arduous seven weeks,” narrates Rutger in the documentary. “That person was my mother. I couldn’t possibly repay her, though she believes that I could by doing one thing: loving her with all my liver.”

Rutger also carries Cale with him wherever he goes – literally and figuratively. He knows that he owes Cale his life and he plans to honor him by pursuing his dreams without fear.

“I think about Cale all the time,” said Rutger. “He was a pilot and a racecar driver and obviously he loved life and he hoped to live life to the fullest. I always think about that. I know with my lower immunities that I can get sick so easily and I’m not sure what could happen. I’m hoping to live a healthy life and a very long life, but all I know is I need to live my life. I’m going on with that motivation to live my life to the fullest.”

Thousands of Virginians are waiting for a life-saving transplant right now. Your decision to say YES could make all the difference to someone else. Sign up today to become an organ, eye and tissue donor.