College Friends Share a Liver, Return to US Transplant Games of America

Matt and Patrick were college friends. They shared a soccer team, a fraternity and a room.

“About six years ago, I opened an email and it was a friend saying ‘Hey, did you hear about Matt?’” said Patrick Kacani. “I read back through the email chain and saw he had liver disease. The medication wasn’t working and he needed a liver transplant.”

Matthew Felix had been diagnosed with liver disease when he was about 30. His primary bile duct was narrowing and he had problems similar to what a heavy drinker might experience.

“About six years ago, I opened an email and it was a friend saying ‘Hey, did you hear about Matt?'”

It took a while for him to realize it though. He had first noticed that he was gaining weight and retaining fluid but he chalked it up to getting older, even though he was in great shape and he stayed active. Then the flu-like symptoms started and after four or five episodes in a year, his wife sent him to get checked out.

Liver disease was confirmed and after all else failed, in March 2012, he was put on the transplant list at Mt. Sinai Health System in New York.

Chain reaction
Matt played in a men’s soccer league and when he told one of the organizers that he wasn’t feeling well enough to participate that season, word got out.

“Any time you say ‘I’m not feeling well,’ as opposed to ‘I have a rolled ankle’ or “I have a pulled hamstring,’ people start asking questions,” he said. 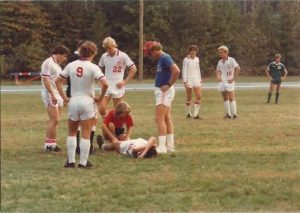 Matt and Patrick were on the University of Richmond soccer team in the mid-eighties.

Matt told them that he needed a liver transplant and that a living donor was more likely to materialize than a deceased donor, since so many people are on the waiting list in the

One of the people who received it was Patrick.

College friends
Patrick and Matt had met about 40 years earlier at the University of Richmond. They lived on the same hall but didn’t meet until they were both walking to soccer tryouts freshman year. They both made the team and later, both joined the same fraternity and eventually became roommates.

It wasn’t going to be that easy though. A number of people got tested to donate to Matt and while some of them matched his blood type, no one was able to get through the psychological screening.

“I cannot confirm or deny that we may have spooned together one time.”

Matt’s immediate family members weren’t matches, Patrick wasn’t worried though.
“The transplant coordinator asked how close we were and I said ‘I cannot confirm or deny that we may have spooned together one time,’” he said.

A big decision
But Patrick didn’t take the decision lightly. Before he threw his hat into the ring, between Memorial Day and July 4, 2012, he and his wife (“mostly my wife,” he admitted) spent a lot of time researching the risks and recovery time for liver donors. 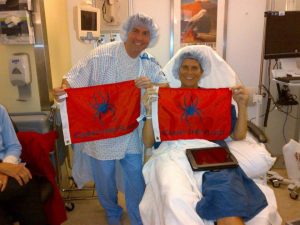 Matt and Patrick just before the transplant.

“If I was turning in that paperwork to be tested, I was making a commitment,” he said.

“We needed to be sure because I’d be out for three months and we had a daughter in kindergarten, another daughter in high school and a son in college. I wanted to be sure I had all my ducks in a row before I put in the paperwork.”

Patrick was sure, but Matt still hadn’t even told him that he needed a liver transplant.
“He finally called and said ‘Let me tell you –‘ and I said, “Matt, I’ve already heard and I’m being tested.”

“I wanted to be sure I had all my ducks in a row before I put in the paperwork.”

Matt said he was grateful but unconvinced it would work since other people had already been rejected.

The big day
While Patrick waited to hear whether he’d been approved by Mt. Sinai, Matt was seriously considering switching hospitals and having the transplant – if there was one – done by NY Presbyterian/Columbia University Medical Center instead.

He called to tell Patrick but Patrick had news for him as well.

“Just know that you’ve got a liver to go with you, wherever you go; I’ve been approved,” Patrick said.

“I was pretty floored,” he said. “I didn’t expect him to get through it.”

Patrick wasn’t really supposed to tell Matt yet but he didn’t care. 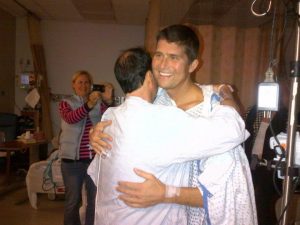 Matt and Patrick hug after the transplant.

“After you get approved, there’s a two-week discernment period where no one from the hospital contacts you and you’re not supposed to tell the recipient – you’re just supposed to reflect on it before you make a final decision,” Patrick said. “I told Matt I didn’t need two weeks. I was sure.”

But it still wasn’t that easy. Matt did end up transferring to Columbia, so Patrick had to qualify again.

That wasn’t as hard though, since he’d already done it once.

“I didn’t expect him to get through it.”

The two men were taken to different operating rooms and prepped. Then surgery began on Matt. Doctors examined his liver to be sure there were no signs of cancer or other issues that would preclude the transplant. Once they were sure, they sent word over to Patrick’s doctors, who began removing a piece of his liver.

“My liver kissed into the spot,” Patrick said. “It was a perfect match. They couldn’t have asked for a better match.”

Life-changing
Matt said his liver is functioning well and he’s back to being an active, healthy father and husband.

Six years after the surgery, the two men are preparing to compete for the third time in the Transplant Games of America.

“My liver kissed into the spot.”

Competing in the living donor division, Patrick is planning on track and field, plus swimming and the team trivia event.

“The first time we went it was in Houston in July and we said ‘we need to compete in some stuff that’s inside,’ Patrick said, explaining his interest in the trivia competition.
In their third year competing though, Matt said he’s in good enough shape to take on the more strenuous outdoor sports, leaving indoor competition spots open for other transplant recipients who have more physical limitations. 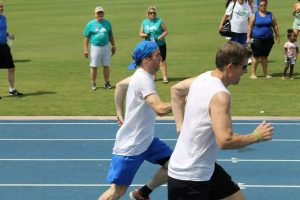 Matt and Patrick competing in the 400M Race at the US Transplant Games in Houston.

Their upcoming trip to Salt Lake City for the games is their major excursion for the summer, but the two men see each other regularly now anyway. Being closer as friends is one of the benefits they both experienced after the transplant.

“It’s a life-changing experience for both of us,” Matt said. “Patrick gave me part of his liver. That’s not just a regular favor. It’s not just walking someone across the intersection and they say ‘thanks’ and you both move on.”

Instead, the two men and their families have gotten closer as friends and Patrick has become an ambassador for organ donation.

“It’s a life-changing experience for both of us.”

“Before the surgery, I hadn’t even been listed as an organ donor,” Patrick said. “I’d heard about it peripherally, but I’d never heard anybody speak about it or about the importance of checking the box. It wasn’t part of my life but now it’s a big part of my life.”