Published on November 6, 2018by Kelly Vance

Your loved one or yourself is already gone but someone else, another person, they can actually live,”Pastor Gloria Newsome-Brickhouse wasn’t always an organ donation advocate. In fact, organ donation wasn’t really on her radar until a deacon at her church invited her to attend a seminar for the blind about 10 years ago.

“They kept talking about the need for the African-American community to be involved in organ donation,” she said. “I felt so bad because I didn’t know much about it until I attended the seminar.”

At that moment, Newsome-Brickhouse became an activist for organ donation in the African-American community. And as an associate pastor at First Baptist of Norfolk, she’s in a good position to help. 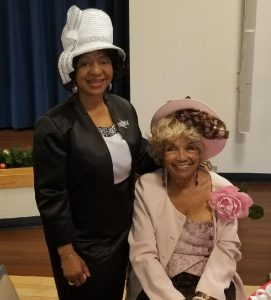 Pastor Newsome-Brickhouse and a member of her congregation.

African-Americans make up only about 12 percent of the U.S. population but they make up almost 34% of the kidney transplant waiting list. And organ donations among the black community are considerably lower than white donations – five times lower in some years.

“In the African-American community, most of us are afraid,” Newsome-Brickhouse said. “We fear that once we pass, someone’s going to cut us up. It’s a lack of knowledge and it’s fear.”

Ever since she became aware of the problem during the seminar for the blind, Newsome-Brickhouse has been working to turn the tide.

“You have to teach people about what is true and what is false,” she said.

For instance, Newsome-Brickhouse said she didn’t realize herself that medical issues don’t necessarily preclude you from becoming an organ donor.

“It’s a lack of knowledge and it’s fear.”

“People say ‘I’ve got diabetes, stroke, kidney problems so no one is going to want my organs’ but that’s not true,” she said. “The cornea, they eyes can be used to give someone else sight. I didn’t know that at first either.”

The other major misconception that Newsome-Brickhouse deals with is the belief that once a person dies, their body will be treated disrespectfully if they are an organ donor.

“Your loved one or yourself is already gone but someone else, another person, they can actually live.”

“They say ‘we don’t do that. I tell them ‘it’s going to be used for someone else.’ You have to help them understand that. Your loved one or yourself is already gone but someone else, another person, they can actually live,” she said.

One of Newsome-Brickhouse’s avenues for outreach is National Donor Sabbath. The annual event is observed two weekends before Thanksgiving, from Friday through Sunday – the days of worship for major religions in the United States. On National Donor Sabbath, faith leaders, donor families, transplant recipients and medical professionals participate in religious services and programs all over the country to educate the public about organ donation.

Part of the point is for faith leaders to assure their congregations that all major religions now encourage organ donation. It’s also a chance to let communities hear first-hand about the impact donors have on the lives of their friends and neighbors.

“It’s a wonderful opportunity to talk to people about what a difference they can make.”

Newsome-Brickhouse said that after hearing the presentations, between 18 and 25 people usually sign up to become organ donors at First Baptist’s annual National Donor Sabbath service.

“It’s a wonderful opportunity to talk to people about what a difference they can make,” she said.

Informing the next generation

“We organized a ‘Go Green’ campaign a couple years ago to support organ donation,” Newsome-Brickhouse said. “Everyone wore green and Sister Beasley did a presentation for the children. We had been trying to think ‘How can we help the children understand life and death?’ so we talked to them about butterflies and the transformation from a caterpillar to a butterfly. The idea of a caterpillar changing into a butterfly was something they understood and we talked to them about life and death in that way. The children were very receptive.”

“How can we help the children understand life and death?”

The children all needed parental permission to participate and parents were invited to attend as well.

“A lot of parents came and afterward, many of the parents signed up to be organ donors,” Newsome-Brickhouse said. 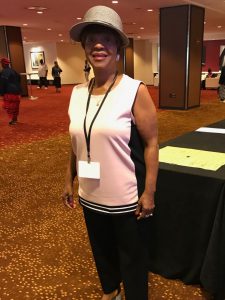 Newsome-Brickhouse doesn’t just work in her own church though. She’s a frequent speaker at other churches, taking her message to any group that will have her.

“When I go to other churches as an advocate, I get an opportunity to talk about the need in the African-American community and to address the fears and the lack of knowledge that so many people have about organ donation,” she said. “I’m just giving them knowledge and giving them facts.”

She was also a speaker last year at the 2016 Faith Summit.

The two-day event is held in Virginia each year to increase faith leaders’ understanding of the organ, tissue, and eye donation process and the life-giving benefits of transplantation. The goal is to create a dialogue between faith communities and the transplant organizations to better equip participants in becoming informed resources for their faith community.

“African-Americans need to sign up to donate and there’s no reason to be afraid.”

This year’s event was held in October and included the perspectives from Muslim, Jewish and Christian leaders, as well as medical professionals and donation advocates.

“When I spoke last year, I talked about the same things I talk about now,” Newsome-Brickhouse said. “African-Americans need to sign up to donate and there’s no reason to be afraid.”

Newsome-Brickhouse also has a new tool to work with as she takes the message forward. She recently saw the 2017 movie “A Question of Faith” in which a child is killed by a car and his father, a preacher, finally decides to allow his organs to be donated. The decision saves the life of another child and the two families become intertwined and united through the gift.

“It had a big impact on me and I’m going to use that when I talk to people in the future,” Newsome-Brickhouse said. “I’m going to tell people about that story and maybe get them to watch it too.”

But a new idea isn’t always necessary. Newsome-Brickhouse said much of her outreach work is “just being out there, answering questions and being present.”

“You’re giving life to someone else. That is an awesome gift.”

Getting the message out is really just a matter of getting out yourself, she said. People don’t know if you don’t tell them and remind them.

“Health fairs are really the best places to reach people,” she said. “There are so many people coming for information and help and they’re receptive to hearing new things.”

But wherever she goes and whomever she talks to, the bottom line is always the same: “You’re giving life to someone else. That is an awesome gift,” she said.