Seeing the World with New Eyes

Published on August 4, 2016by Kelly Vance

And he does it all thanks to a pair of new eyes.

“In 1998, I noticed that my vision was failing,” he said. “My girlfriend at the time saw it first – that I was squinting a lot.”

After his girlfriend, Nisha, pointed it out, Minesh realized she was right – he was always squinting hard in an effort to focus. An eye check revealed more than a basic need for glasses – at the age of 22, Minesh was diagnosed with keratoconus.

The cornea is a clear dome-shaped tissue that covers the eye and keratoconus is a condition that means the cornea has thinned out and bulged into a cone shape.

My girlfriend at the time saw it first – that I was squinting a lot.

His failing vision made school hard, Minesh said, but contact lenses helped for a while. He graduated in 2003 and started practicing as a chiropractor in 2004. But his eyes were getting worse. Because keratoconus is degenerative, the contacts won’t help forever and eventually, a cornea transplant will be needed.

That’s where Minesh was at the age of 29.

“By 2005, it was apparent I needed help,” he said. He made an appointment and told the doctor he was ready for surgery. “The doctor was like ‘Whoa – hang on – you’re way too young,’” Minesh said. While keratoconus does often require surgery, it generally doesn’t get that bad so quickly; the contacts should have worked for many more years.

But after only a few minutes of testing, the doctor stopped and announced that Minesh was right – his case had advanced so quickly that the surgery was needed right away.

“Surgery” meant a double transplant – a new cornea for each eye. Minesh had one eye done in early April 2005 and several weeks later, followed up with a transplant on the other eye. 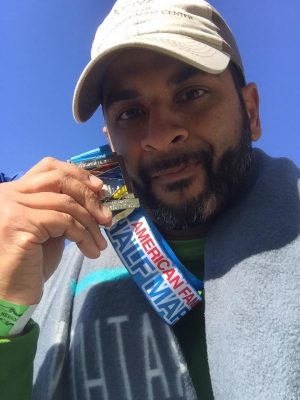 A year later, he had full vision again. But it wasn’t just his eyesight that had returned.

“Vision was a gift from two people, and I needed to do something with it,” he said, explaining that the two organ donors who provided his corneas inspired him to start reclaiming his former active lifestyle.

“I decided I was going to run the Ukrops 10K even though it was only a month away and I hadn’t trained,” he said. “I don’t recommend that, but I did it.”

Out of shape, overweight and suffering from high blood pressure, Minesh decided to go for it anyway. He started running and he never looked back.
“Before, I had been making excuses,” he said. “But I had this gift and I needed to go for it.”

He kept running and then started scuba diving and cycling. He also tried tennis again – a sport he had enjoyed before his failing eyes pulled him away.

I’d become the model of health I’d been preaching to my clients,” he said.

And very quickly, Minesh had A LOT more clients.

The link between eyesight and business wasn’t something he’d ever thought about before but after living with good vision, poor vision and then good vision again Minesh realized how important eyesight is to social interactions.

“Eye contact is so much of our communication and when you feel like you can’t focus on someone’s face or recognize them, it really knocks down your self-confidence,” he said.

His vision restored, both his health and his confidence began to soar.

Minesh expanded his practice and with his wife and business partner, Nisha (remember the girlfriend who’d noticed him squinting in 1998?), he now operates six chiropractic centers and manages more than 30 employees.

He and Nisha, also a chiropractor, work in Colonial Heights but also own the Ariya centers in Ashland and Petersburg and at Gayton Crossing, Innsbrook, and Westhampton in Richmond.

It’s all due, Minesh said, to the two people who signed up as organ donors.

He doesn’t know their names but he knows one was a 21-year-old woman from Northern Virginia and the other was a Southwest Virginia man in his 50s.

“I sent letters and pictures to Old Dominion Eye Foundation,” he said. “”They passed them on to the families of the donors.”

Organ donors give the gift of life and for Minesh, the gift wasn’t pure survival, but quality.

“It was a wonderful gift from two individuals,” he said. “It’s made all the difference in my life. You name it, I’ll try it now.”

As for his own status, Minesh said he’s a registered organ donor, but that was true long before he became a recipient.

“Organ donor, bone marrow donor – everything,” he said. “There’s no reason not to do it and it’s such a huge gift.”