A Story from the Other Side of the Counter

Denise Stotler talks to a lot of customers every day at the DMV. The manager at the Front Royal branch, she works the desk like the rest of her employees, helping customers renew their driver’s licenses and pay their registration fees. Some aren’t talkative but others strike up conversations, mostly about their children and dogs, she said.

One man, however, was different.

“I was waiting on him and he had a bag across his body. It kind of looked like an insulated lunch bag or something,” she said. “As he was getting his money to pay, he bumped the bag and then said ‘this is my heart.’”

Denise said she wasn’t sure what he meant so she kind of laughed but he responded “No, really – I have a bad heart and this is keeping me alive.”

“No, really – I have a bad heart and this is keeping me alive.”

The customer – a man in his 50s, told her that he’s on the list for a heart transplant and the contraption in the bag was keeping his heart going until he gets one.

“I told him that I hope he gets his new heart but he said ‘If it’s meant to be, it will be. What’s bad about it is in order for me to get a heart, it means someone else had to die.’ He said that right now he’s just living life to the very best of his ability and leaving it in God’s hands,” she related.

Denise said his words and his attitude have stuck with her. “He was a very kind, sweet man,” she said. “He didn’t feel sorry for himself and his outlook was great.”

“Then when they get to the counter, we ask them if they want to be an organ donor.”

It was a random encounter but it’s not like organ donation never comes up at the DMV. Most Virginians on the organ donor list got there by signing up when they got or renewed their driver’s license.
Anyone applying for a driver’s license, learner’s permit, motorcycle license or ID card can check the box on the application that says “Yes, I would like to become an organ, eye and tissue donor.” 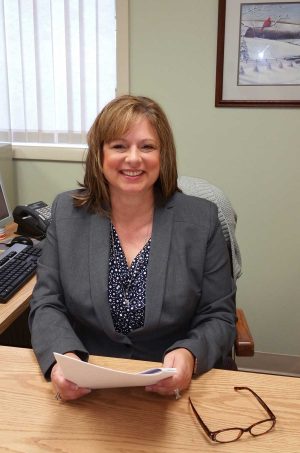 Everyone who checks the box gets added to the Virginia registry of potential donors and the words “Organ Donor” are added below the photo on their license.

But the box is just one little line on a two-page form and it’s easy to miss so Denise said she highlights it on the forms at her Front Royal DMV branch.

“Then when they get to the counter, we ask them if they want to be an organ donor,” – just in case they still missed seeing it, she said.

Denise – a native of Virginia who’s been living in Florida for much of her life — said she’s been an organ donor her whole adult life but had no personal involvement in organ donation issues until she moved back to Virginia six years ago. She reconnected with an old friend, whose 10-year-old daughter needed a heart transplant.

“She celebrates two birthdays,” Denise said. “One is the day she was born and the other is the day when she got her heart.”

“That really hits home when you see it,” she said. “She was born with a heart condition and they’d been going back and forth to Pennsylvania to doctors for years.”

The girl finally got a transplant and recently celebrated the fifth birthday of her new heart.
“She celebrates two birthdays,” Denise said. “One is the day she was born and the other is the day when she got her heart.”

Those two encounters – the DMV customer and the friend’s daughter – were the only two times Denise has ever had a personal experience with organ donation. But they’ve stuck with her and she spreads the word whenever she can.