Over the Rainbow: Motherhood and the Gift of Life

Gwen Mutter knows that being a mother is one of life’s greatest gifts. Her daughter, Stephanie Green, found that out as well after adopting a newborn baby girl in early 2012. What both of them understood was that to give your child everything is as powerful a desire as the fear you have of outliving them. 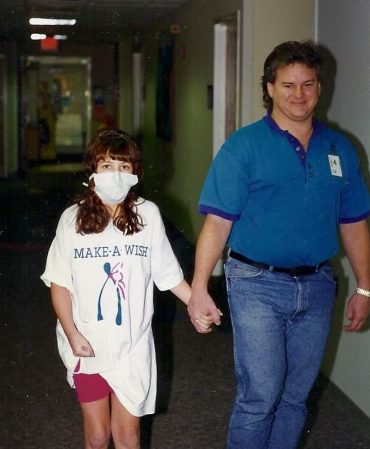 Ten-year-old Stephanie walks the halls at Children’s Hospital of the King’s Daughters.

When Stephanie entered the hospital in October of 1995 at age 10 to receive a heart transplant, her mother was riddled with anxiety. Her little girl had been sick for months before finally being diagnosed with restrictive cardiomyopathy, a disease that causes the heart muscle to stiffen. A transplant was the only way to extend her life beyond that first decade, and though Gwen knew it was the only hope, she felt she had never been more terrified.

But hope, she soon found out, was a privilege, not a right. As she and Stephanie took a walk around different areas of the hospital on her first night there, they passed pediatric oncology patients. “How selfish of me,” remembers Gwen. “We had hope for Stephanie with this organ transplant, and some of these parents had no hope at all.” It was then that her perspective began to shift, and she decided to redouble her efforts to keep her daughter’s spirits up as well as the rest of her family.

What both of them understood was that to give your child everything is as powerful a desire as the fear you have of outliving them.

Stephanie’s spirits didn’t need a lot of coaxing. A sweet child with open arms and a tendency to give wherever and whenever she could, the little girl saw her new heart as the fastest ticket back to playing softball and dancing ballet. Within a month of the transplant, she was back in dance lessons. Within six, she was warming up on the softball diamond.

A new day, a new life

Armed with a new future ahead of her—one that would include, mercifully, her youngest daughter—Gwen set about to following Stephanie’s doctor’s instructions to the letter. She learned about the importance of keeping her daughter away from germs. She asked question after question from the doctors, and she kept a tight schedule with Stephanie’s medication. “The kids would be at school and I’d be at home cleaning doorknobs,” says Gwen of her attempts to increase Stephanie’s odds of living a long life. “But they never knew. You just do these things for your kids.” 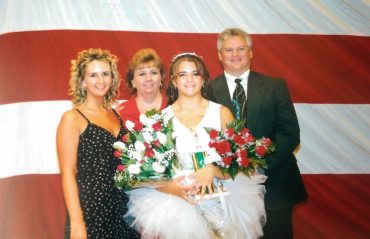 Stephanie with her family at a ballet recital.

The family, which included Stephanie’s older sister by five years, Amber, engaged in another pastime—celebrating their youngest’s achievements. “They told us to expect the transplanted heart to last no longer than eight years before she would need a second one,” says Gwen. “When we came up to hitting that mark, we felt like we were holding our breath.” In the meantime, there were softball games to cheer for, dance recitals to applaud, and encouragement to give as Stephanie began to set goals for herself.

“They told us to expect the transplanted heart to last no longer than eight years before she would need a second one,” says Gwen. “When we came up to hitting that mark, we felt like we were holding our breath.”

Eight years came and went. Stephanie graduated high school, went on to study psychology and sociology at Christopher Newport University, graduated, and married her high school sweetheart, James. Each milestone in her life felt like her blessings were multiplying exponentially, and the family relished what felt like time given to them wrapped in a bow. 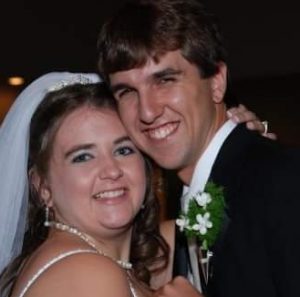 While it didn’t exactly surprise Gwen or Amber, given Stephanie’s warm-hearted personality, they hadn’t expected her to become so devoted to the memory of her organ donor. She didn’t know the identity of the person she called her “hero”—she filled out some request forms for information but never got anything back. It didn’t matter. She started aligning her life anyway to have experiences that maybe her donor had never gotten to have.

It wasn’t a sense of living on borrowed time, it was a sense of living a full life because someone else can’t. Stephanie traveled all over, loved with her whole heart, and documented everything she could. She began writing open letters to her donor, including one she read aloud on video at her heart’s 20-year anniversary. Each one listed what she’d been able to do because of someone else’s gift, and gave the impression of a happy, healthy life.

To her family, it wasn’t just her own life that had been taken to new heights by the gift of a heart—their own lives were that much richer with her in it.

In 2012, Stephanie Green and her husband, James, accomplished what her family saw as a perfect role for two people with so much love to give. The couple adopted an infant they’d name Emilyn, and their delight in their baby was contagious. When Emilyn smiled, Stephanie smiled. When Emilyn was excited, Stephanie was excited. Gwen recognized her own love on her child’s face, and when Amber announced three years later that she was expecting her own child, the older sister remembers that Stephanie cried with joy for hours. 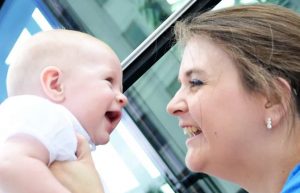 All three women were now mothers, and looking back, Gwen and Amber can hardly believe their luck that they got to experience it all together, even for such a short time.

Stephanie’s first transplant began to fail her in 2014, and she was put back on the list. Two years later, on Easter Sunday, Gwen got a call from her daughter in the middle of the night that it was time to go to Duke and receive her new heart. The family had been prepping Emilyn for this occasion, telling the little girl that her mommy’s heart would now be able to get better, and she’d be able to run with her and play with her and do all the things she hadn’t been able to do. The general mood was excited and hopeful, as they caravanned from Portsmouth, Virginia to Durham, North Carolina on a three hour trip they’d get to know well.

All three women were now mothers, and looking back, Gwen and Amber can hardly believe their luck that they got to experience it all together, even for such a short time.

Gwen didn’t experience the anxiety she’d felt 20 years before during that rain-soaked journey. And at first, all signs were positive. Stephanie responded well to the transplant with only minor issues. “She looked good,” recalls her mother. “She didn’t look sick at all.”

The family drove Stephanie back to Duke for follow-ups and blood work, and Gwen came over every day to help around the house so that her daughter could save her energy for her granddaughter. Stephanie spent most of her time in a recliner, playing games on a TV table next to it with Emilyn. She worried that if something happened to her, Emilyn would remember her like this, but Gwen knew that memories of mothers don’t dwell on how much fun they could have had, just how much fun they were. 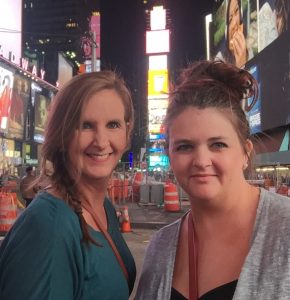 Stephanie and Amber traveled all over the world together.

Things weren’t progressing as well as they should have been during the next few weeks, and soon, Stephanie had some pain. Her parents made the trip with her back to Duke, and one night, after a day during which things seemed to be looking up, she slipped into unconsciousness she would never leave. Stephanie Green died on Memorial Day 2016, with an entire life behind her. “A whole life,” as her mother likes to say. “Not just a portion of it.”

Beauty is a lasting legacy

Stephanie had embraced rainbows as the symbol of her lucky life, and as the symbol of someone who makes a selfless gift so that another may live. Every time she waited for a new heart, she would say she was waiting for her rainbow, and when she finally left this earth, her sister Amber felt that the occasion was its own rainbow. 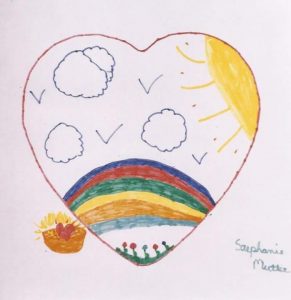 Stephanie always looked for rainbows, noting “there has to be rain to make a rainbow.”

As Amber said in her speech at her sister’s memorial, “God sent another Rainbow on Memorial Day, and while this was not the rainbow that our hearts desired, we know that it was one that Stephanie couldn’t wait for. This rainbow provided complete healing. Complete joy. No pain. No tears. No hospitals. No hearing aids. No medicines. No hurt feelings. No misunderstandings. And lots of singing, dancing, and joy.”

Emilyn misses her mother, says Gwen, and she often looks up at the sky and talks to her. Now a five year old, she doesn’t quite know that her mother has died, but instead understands that she had to go to heaven to live where her heart wouldn’t bother her. But every day, the child’s grandmother and aunt see characteristics that her mother has passed onto her—a kind heart, a sweet nature, and an ability to find the beauty in every aspect of the world around her.

“Stephanie always said she was in the business of making memories,” says Amber. “She made those memories for her donor, and she did it for her family.” 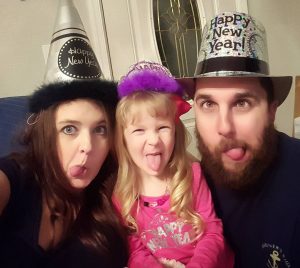 Organ donation has factored a lot into Gwen’s thoughts as Mother’s Day approaches. It doesn’t just save a life, she says after a bit of thought, it creates a whole new one. And in Stephanie’s case, organ donation allowed Emilyn to find her home, Gwen to see her daughter achieve everything she wanted to, and Amber to have a sister who was also a best friend, long into their adult years.

“Stephanie always said she was in the business of making memories,” says Amber. “She made those memories for her donor, and she did it for her family.”

And it’s these memories of a daughter, a sister, and a mother that make this Mother’s Day so meaningful for Amber, Gwen, and their whole family. They have so much more of Stephanie to remember than they ever thought possible, and for that, they hope Stephanie gave her “hero” the biggest hug as soon as they met, somewhere on the other side of the rainbow.