Published on August 1, 2017by Kelly Vance

After a 48-year career, transplant nurse Gigi Spicer finally retired in the spring.

That lasted for 20 days.

It’s been a long journey from Richmond, Va. to New Orleans. Spicer graduated in 1969 from what was then the Medical College of Virginia. Her transplant nursing career was inspired by her mother, one of the first few transplant nurses in the country.

In those days, Spicer said, most people with advanced kidney disease died of renal failure.

“I cared for those people while I was a nursing student and there wasn’t much you could do for them,” she said.

“The first time I saw a transplant, I was absolutely blown away by the total miracle of the whole thing,” Spicer said.

The first successful kidney transplant had been done in 1954 but most patients’ immune systems rejected the donor organs. Medical teams tried different ways of suppressing immune systems but in many cases, the immunosuppression killed the patients instead.

By the 1960s, however, a combination of new drugs and tissue typing had made kidney transplant feasible. 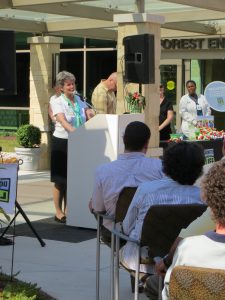 Gigi Spicer speaking at a Donor Awareness Day ceremony in 2013.

“The first time I saw a transplant, I was absolutely blown away by the total miracle of the whole thing,” Spicer said. “I had been caring for the patient and she got a kidney from a deceased donor. It started working right away. It was amazing. Her color changed and she just got better immediately.”

From then on, Spicer said, “transplant became an absolute fascination.”

The miracle of modern medicine

“The cool thing about getting older and living through a lot of changes is you can see the advancements,” Spicer said.

And after more than 50 years in nursing school and practice, she still finds that the most surprising thing about transplant is that it’s even possible.

“It’s amazing that it works at all,” she said. “And the advances we’ve had … people died 100 percent from this disease. To watch the evolution of the process – through dialysis and transplant – it’s incredible. I mean, who even thought of us doing donor exchanges and flying organs across the United States?”

“That chain can just keep going,” Spicer said. “Computers have let us match people up beyond what we ever thought we’d be able to do.”

And yet, she said, progress never moves smoothly in a straight line.

“Every time new medicines came out, everyone said ‘Oh this will be the miracle,’” she said.

“Well it was, but then this happened or that happened. There’s always a catch.” That’s where the challenges come in.

The next big thing

The biggest challenge is working within the constraints of healthcare, in hospitals where there isn’t enough money or where there’s a nursing shortage, she said. Healthcare financing and a lack of nurses is always a problem.

And then there’s the challenge of waiting.

“You get impatient waiting until the next phase,” she said. “The next cure, the next big thing. And then sometimes you see problems and think, ‘If I could be in charge here, what could I do?’”

Spicer got the chance to find out in 1990. She was working at VCU Health as the clinical coordinator in charge of kidney transplant services when she got a call from Henrico Doctors’ Hospital.

They wanted her to establish a kidney transplant service in a community setting and it was too good a change to pass up.

“I figured how hard could it be?” Spicer said, laughing. “I found out.”

She became the clinical director for Henrico Doctors’ program, which she built from the ground up.

“It was great,” she said. “It’s organ transplant, but more like in a private practice. I got to see the patients through the entire process.”

Spicer worked at Henrico Doctors’ Hospital until her 20-day retirement earlier this year.

What it takes
One of the things she’s realized, she said, is that the patients who go through renal failure, dialysis, transplant and recovery all have a will to keep trying.

One of the things it takes, she said, is control.

“The patients who do well are the ones who control what they can control,” she said. “They follow the nutrition guidelines and they follow the doctors’ orders.”

A patient’s personal commitment to health is one of the most important factors in a successful transplant and that’s as important as all of the medical aspects, Spicer said.

“We get so caught up in the high-tech miracle drugs sometimes, we forget that when all those other pieces aren’t in place, the outcome doesn’t work,” she added.

It’s a piece she’s been focusing on with her patients: “really trying to help patients engage. So many people don’t understand even that diabetes and high blood pressure can hurt their kidneys. We have to help the patients engage and understand how it all works together.”

Working together is also a requirement of transplant teams. “It’s a multi-disciplinary team. We have synergy and we spend a lot of time saying ‘What do you think?’ and ‘Well, what if we tried this?’ It’s not an army of one.”

The team follows the patient through the entire process, from renal failure through dialysis, transplant and recovery.

“That’s the most rewarding part,” Spicer said. “You care for these patients the entire way through and then you get up at 2 o’clock in the morning and watch the transplant, see the kidney work, watch them go home and have a life. It’s amazing.”

Over the course of her career, Spicer has participated in more than 1,000 kidney transplants, in addition to liver transplants.

But one in particular stands out.

“A man on dialysis got a kidney from his sister and after he had recovered a little, he had a celebration and I got to go,” she said. “He said ‘I want to thank all of you for allowing me to have an ordinary life.’ And then he stopped and looked at us and said ‘Please understand how extraordinary an ordinary life is.’”

‘I want to thank all of you for allowing me to have an ordinary life.’

“That’s always stuck with me,” she said. “You get up in the morning, drink your coffee, go through traffic, work, commuting, all the things you go through just to have an ordinary day. For someone who’s been in kidney failure, that really is extraordinary.”

“I’ve gotten to see all of that over and over again,” she said. “Nursing really is an amazing career.”