Back to School with a Healthy Heart

Like most kids his age at this time of year, Matthew Brown is gearing up to head back to school. And, like most kids, his summer vacation was filled with a lot to report—sports, amusement parks, and a whole lot of running around. 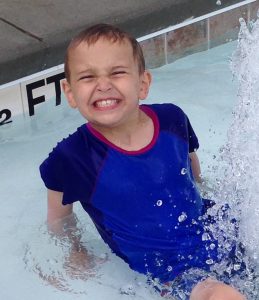 Until June of 2014, when Matthew was five years old, he had to keep his natural adventurousness at bay. The little boy had already experienced numerous surgeries, including a valve replacement and a pump device placement, since his birth in 2009.

A heart that was not only positioned on the wrong side of little Matthew’s body but also turned around to face backwards created some challenges. And the first few weeks, then months, then years of his life were marked by periods of intense fatigue and lack of appetite. Matthew and his mother, Kelly, spent months at the Children’s Hospital of Philadelphia, occasionally getting visits from Kelly’s husband and Matthew’s three older siblings. Such a life of anxiety, trying to defy odds, and constant prayer became the norm for the Browns, until the need for a heart transplant began to come clear.

“That was harder for me to accept even than the surgeries,” remembers Kelly. “When kids go through surgery, you pray that it goes well and that they recover and everything gets back to normal. With a transplant, you can’t pray for somebody else to lose a child.”

“When kids go through surgery, you pray that it goes well and that they recover and everything gets back to normal. With a transplant, you can’t pray for somebody else to lose a child.” 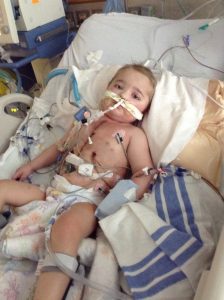 Matthew, one day after his heart transplant.

At the time, the four-year-old Matthew had suffered a sudden “crash,” and the local doctors weren’t sure the boy would make it through the night. Without any discussion whatsoever, his father and siblings packed, got in the car, and drove through a snowstorm to meet Matthew and his mother at the hospital in Philadelphia. A ventricular assist device called a Berlin Heart had to be flown in from Germany for a procedure never before attempted on someone with Matthew’s specific anatomy. “His vital signs were so bad, and he needed so much medication, that I just sat there in a chair, rocking him and holding him,” says Kelly of the anxious few days they waited. “My husband was worried even about that gentle movement. We just thought any little thing could make the situation worse and then we’d never see him again.”

In a stretch of good luck, the Berlin Heart integration was successful, and after a few more months of complications that needed to be addressed, Matthew was finally moved from ICU to the regular cardiac floor. But the family still wouldn’t be able to rest easy until they knew Matthew had a new donor heart that would keep him healthy for the long-term.

Then, in a month later, in June of 2014, a little boy named Brayden passed away. His family, who lived in Tennessee agreed to allow their son to give the gift of life. “My initial reaction was relief that he might actually get to go home,” says Kelly of the moment she got the call that a heart had become available. “But pretty quickly I realized that the good news for me was bad news for another family.”

The transplant itself was not an easy matter, and a handful of follow-up procedures had to be scheduled, but once Matthew was stable with his new heart, life took an immediate turn. 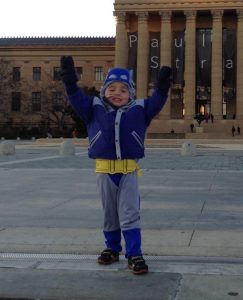 Matthew’s post-transplant “Rocky” pose in front of the Philadelphia Museum of Art in 2014.

Life with a new heart

The boy had more energy, his zest for life returned, and his color looked so encouraging. Kelly took him to the Philadelphia Museum of Art, and let her newly healthy son run up the steps and assume the iconic “Rocky” pose at the top. She could hardly believe what she was seeing.

But during his recovery, Matthew saw his mother becoming more and more anxious about another issue entirely: the letter she kept planning to write to the family of his donor. Never one to be shy, he finally insisted on writing it himself, asking for a paper and a pen—a five-year-old hooked up to IVs in a hospital bed, writing “We’re sorry that your child died. We love you. Matthew.”

Kelly had all the encouragement she needed to pen her own letter after she saw what her son had written. And a couple of months later, they got a reply.

“We’re sorry that your child died. We love you. Matthew.”

Now, the two families have come together multiple times, bridging the gap between Virginia and Tennessee with the love they feel for their two sons. Brayden would have turned 12 this year and been heading off to 7th grade, most likely carrying a baseball mitt and looking forward to practice. Matthew understands this, and at age eight even understands how happy it makes Brayden’s family to see how actively their little boy’s heart has changed another child’s life. 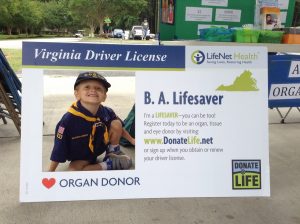 And Matthew refuses to be restricted anymore. He even got to go to summer camp like other kids his age. At Heart Camp, a gathering place at the Eastern Shore of Maryland for children with heart conditions, Matthew opted to do anything and everything he’d never tried before. His favorite part? A 40-foot managed free fall called “the Giant Swing.”

“I asked him if he was scared when I saw the video of him dropping 40 feet,” laughs Kelly. “And he said ‘Why would I be scared? I’m only scared when I might die.’”

Every summer, the family treks to Busch Gardens in Williamsburg, Virginia, where Matthew hopes against hope that he’s made the height requirement for more and more rides. This year: the brand new wooden coaster, the InvadR, took Matthew on, and Matthew won. 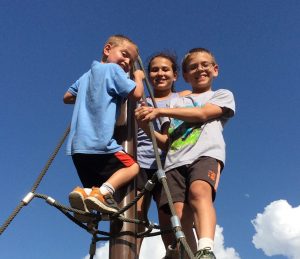 Matthew playing with his brother and sister.

“It was the best ride ever,” he gushed after his return. “It’s mostly boosters, so you go really fast, and it wasn’t that bumpy!”

Like any healthy eight-year-old, Matthew doesn’t view the beginning of school with such optimism. He’d rather stop time and keep it summer vacation, where he can make up for those lost years of swinging, swimming, and riding.

But time must go on, and school must begin. Matthew will be able to face new challenges—if not quite of the daredevil variety—in the classroom like any other third grader. His parents, on the other hand, are just pleased to watch him grow up.