Fairfax Couple Rings in the New Year with New Hearts

Taylor and Collin’s life together officially started in 2016 when they began dating. A young couple living outside of Washington, D.C., they’re celebrating their second Christmas together as they figure out the future and reminisce about a past that’s been full of both sickness and miracles. 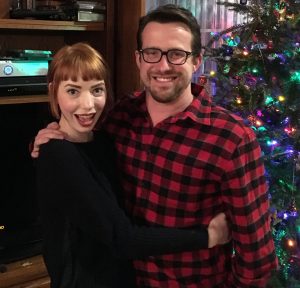 Taylor and Collin prepare to ring in the New Year with new hearts.

They celebrated their anniversary on June 9 but it’s not just the anniversary of the day they started dating in 2016. It’s also the day – five years earlier — that both of their lives were saved by heart transplants.

They didn’t know each other at the time – even though they were living in hospital rooms just a few yards apart. Their parents had met though, through long and anxious hours on the Inova Fairfax Hospital ward, where their children were both dying of heart failure.

“They told me ‘There’s a girl in the room next to you but I was like ‘there are other people in the world?’ I didn’t even care, I was so sick,” said Collin Kobelja, now 29.

The girl in the next room

His now-girlfriend, 24-year-old Taylor Givens, was indeed in the next room, also waiting for a heart transplant. She’d been a perfectly healthy teenager until a common cold attacked her heart. Her condition fell rapidly and she was put on the transplant list. On June 9, 2011, she weighed only 85 pounds and doctors told her parents she couldn’t live more than 24 hours without a new heart.
And then the call came and Taylor was rushed into surgery.

The boy down the hall

But just down the hall, Collin was also dying. He’d already had one heart transplant, as a toddler in 1990. By 2011, his condition had deteriorated and on June 9, doctors had given him less than 24 hours as well.
And then his call came – only a few hours after Taylor went in for surgery.

Taylor and Collin both got new hearts on the same day but they weren’t equally matched.

“Hers was a perfect match,” Collin said. “Mine was not.”

“You were so sick they didn’t have time to look at all the details,” Taylor reminded him. “They just looked that it was the right blood type and the right size.”

“They were just trying to buy me time,” Collin agreed. “They knew I’d need another one later.”

The amazing thing, they both said, is that they got the hearts at all. Donor hearts are allocated in a circle outward from the place where the donor died. A patient who is a match and is hospitalized in the same town will get the donor heart over a patient hospitalized on the other side of the state.
Taylor and Collin both received hearts from several states away – hers from Georgia and his from Florida.

“We were in Northern Virginia so the fact that our hearts came from out of state means there wasn’t a recipient waiting in those states,” Collin said.

If there had been, either Taylor or Collin would be dead. Instead, they’re celebrating the holidays together after 18 months as a couple.

A long road to recovery 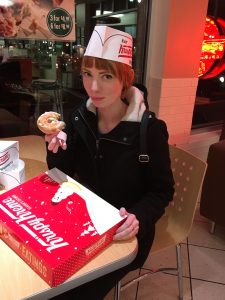 But they didn’t start dating after the transplants. They didn’t even meet until years later.
They became Facebook friends though, and stayed in touch online. As they recovered, they were both in and out of the same doctor’s offices but they were both still too sick to care much about meeting new people.

Nevertheless, several months after their transplants, he moved to California to get a sociology degree from the University of California – Irvine. Eighteen months after his second transplant, he had a third, on Dec. 17, 2012.

Taylor wanted to meet and talk, but Collin was in no place for it – either emotionally or geographically.
“I’d never met anyone else who’d had a heart transplant so I desperately wanted to be friends but he was having such a hard time; he was just trying to survive,” she said.

So it wasn’t until 2016 that they met. Collin was back in Northern Virginia to see his family and he wanted to visit his transplant team at Inova Fairfax. He wrote to Taylor to see if she knew whether they were still there five years later.

“I told her ‘I like talking to you. We should talk when you’re not in the hospital.”

It turns out, they were – and so was Taylor. She was staying in the hospital recovering from tonsil surgery.

“She told me to come by her room and see her while I was there,” Collin said. 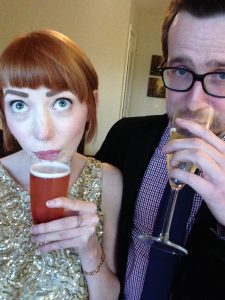 He did, and the two finally met in person. They enjoyed talking so much, they decided to do it again.

“I told her ‘I like talking to you. We should talk when you’re not in the hospital,” Collin recalled.

They arranged to meet again and they began dating – on June 9, 2016 – five years to the day since their heart transplants.

But it wasn’t just an easy happy ending. In the years following the heart transplant, Taylor was diagnosed with cancer, brought on by a virus in her new heart.

Her heart donor had the Epstein-Barr virus, a common blood virus that for most people, turns into mononucleosis – if it causes problems at all.

“But if you’re immunosuppressed, it can turn into lymphoma,” she said.

It shouldn’t be life-threatening but it requires chemotherapy. In September, Taylor finished her second round of chemo – not long after Collin finished college and moved back home to the D.C. area.

And now, they’re putting together their future – more carefully than most young couples have to.

“We share this common past – our transplant experience is almost exactly the same – and now we have the future.”

That’s going to be the biggest factor in where they settle down for good, so Collin is hoping for a federal job in the D.C. area – where they can have government health insurance and access to top medical facilities.

“It’s a long road but we’re together,” Taylor said. “We share this common past – our transplant experience is almost exactly the same – and now we have the future.”