Thankful for time: A Galax family heads south for Christmas

While other children are dreaming of a white Christmas, Audrey Gillespie is dreaming of palm trees and Mickey Mouse this year.

Audrey spent her first Christmas in the hospital waiting for a heart transplant but this year, she’ll spend her fifth Christmas at Disney World. 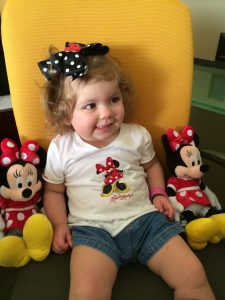 Audrey at her 2nd birthday party.

“We found out at the 20-week ultrasound that she was going to be born with half a heart,” said her father, Phillip. “One out of every 4,300 babies are born with it and it was kind of tough going, knowing what we were facing, but at least the doctors were prepared when she was born. Sometimes they don’t know until the baby is born.”

“We found out at the 20-week ultrasound that she was going to be born with half a heart.”

Born in March 2012, Audrey was only six days old when she had her first open-heart surgery. Doctors at Duke University performed an operation so her heart could work with only one ventricle.

They knew before they started that it wouldn’t be enough – eventually, Audrey would need a new heart.

“We spent the majority of those first four months in the hospital,” Audrey’s mother, Mandy, said. “Our boys’ grandparents helped out a lot.”

The Gillespies lived in Galax, Va., with their sons, 3-year-old Palen and 5-year-old Camden, but Duke University Hospital was hours away, in North Carolina. Mandy and Phillip got an apartment near the hospital and the boys spent some of each week with their grandparents and then went to stay with their parents on the weekends.

It was all a whirlwind, their parents acknowledged, conferring with each other to recall which surgery happened in which month.

“They put her on the transplant list and we waited.”

At four months old, Audrey had her second surgery, receiving donor tissue to repair her heart. Everything seemed to go well and the Gillespies actually got to go home for a month. 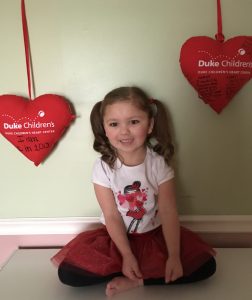 Then they were back.

“She went into cardiac arrest and then heart failure,” Mandy said. They put her on the transplant list and we waited. She was only on the list for three months and I guess that isn’t really that long but it felt like a long time.”

“She got the heart transplant just after Christmas, when she was nine months old.”

Audrey moved back into the ICU at Duke and her parents settled into their apartment.

“The entire stay in the ICU was over a year,” Mandy said. “It was a long time. She got the heart transplant just after Christmas, when she was nine months old.”

Holidays in the hospital

“Our first Christmas was in the hospital,” Phillip said. “It was sad but it was also a really good experience being together. A lot of other families were basically living there too and the doctors and nurses, they were our family. They considered us family as well and it was nice being with them.”
One of the most meaningful things for Mandy was the photo shoot.

“Our first Christmas was in the hospital.”

“Our boys always had their pictures taken at Christmas but Audrey was in the ICU,” she said. “We had some nurses who did photos on the side. Audrey was hooked up on all these machines but they doctored the photos to take out the tubes and machines. It was so wonderful.”

A week later, the call came.

In the first days of January 2013, Audrey got a new heart.

The Gillespies don’t know who the donor was – only that it had to have been a child about the same size as Audrey.

“We waited until the one-year mark like we were told to and then we reached out to them in a letter but we haven’t heard back yet,” Mandy said. “We’d still like to.” 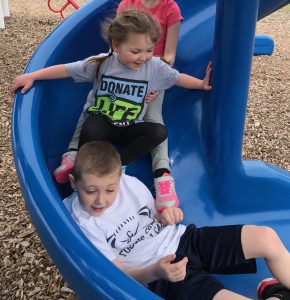 Audrey and her brothers.

Even after the transplant, things were tough. Heart failure affects the stomach so Audrey had been tube-fed for much of her life in order to eat. Even after the heart transplant, she had trouble eating for a long time.

“She’s had a lot of feeding issues,” Mandy said. “She’s eating fully now, but only in the last year.”

“We didn’t think we’d ever see the day she could eat a chicken nugget,” Phillip added.
For the entire first year after the transplant, Audrey was still in and out of the hospital regularly.
Her older brothers, now 8 and 10, “have been remarkable through the whole thing,” Mandy said. “They step in to help whenever we ask them to.”

“There’s no jealousy,” agreed Phillip. “It’s all they know because they were so young when she was born.”
As for Audrey, she’s still immunosuppressed, so the whole family has to take precautions to keep her healthy but the Gillespies agreed they try not to keep her in a bubble.

To that end, they’re planning for a holiday trip to Disney World. It will be the second trip for Audrey, although she was too young to remember the first time.

“She loves Mickey Mouse and Minnie Mouse,” Phillip said. “The first time we went, she was 2 and she was scared of them but she’s long over that now – she loves them.”

“We never know what’s ahead so we want to enjoy everything.”

The five Gillespies will spend a week at Disney over Christmas. It’s not their usual holiday tradition, but they’ll still do most of the pre-Christmas traditions that the children are used to.

“Audrey loves decorating the tree,” Phillip said. “We put the tree up really early this year, around Thanksgiving, since we’re leaving for Christmas.” 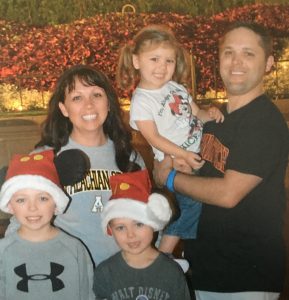 The Gillespies celebrate Christmas at Disneyworld.

She and her brother also love decorating cookies, but their favorite thing is the Elf on a Shelf tradition.
“Audrey’s favorite thing to do is wake up to try to find the Elf on a Shelf,” Phillip said. “We have boy elf and a girl elf. The boys named theirs Biscuit – I don’t know why – so she named the girl elf Cake.”
Biscuit and Cake appear in a different place in the house every day of the season – part of the holiday magic that brings the toys to life during the night so they can move around the house to hide before the children wake up in the morning.

This year, they’ll have to finish all the holiday magic before they head south for the week. The children – and their parents – are excited about the adventure.

“We never know what’s ahead so we want to enjoy everything,” Phillip said. “We’re really thankful for the time we have with her. We’re not sure what the future holds so we’re enjoying every day.”