One heart and the will to stay positive

Melinda Dillon has lived through the unthinkable, although you’d never know it from the way she talks. She’s upbeat, funny, and practically glows with life—she’s taken the words on the small tattoo at her wrist seriously, and she works hard to “stay positive.” 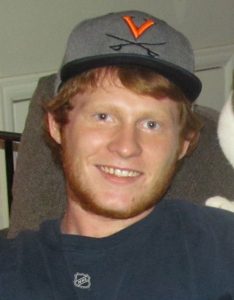 The tattoo shows the lifeline of a beating heart alongside a B+, the blood type of her son, Lukie, who wrote the words “stay positive” on his suicide note.

It’s been less than two years since her 21-year-old took his own life, after nearly a decade of battling with mental illness. “People always say ‘You’re really strong,” she says in a rare moment of total seriousness. “And I say, ‘No, I’m really not strong at all, it’s just a choice. I have to make the very best of the rest of this life that I have, to do something to honor Lukie, helping other people, to make it easier for just one person.

Melinda herself has been helped by her supportive family and friends, but she’s taken comfort in no one so much as Dave.

A 56-year-old ex-Navy New Yorker, Dave brings joy to Melinda and her family almost every day. They’ve met in person and sometimes they speak on the phone, but mostly they communicate via Facebook. When Melinda looks at him, she sees a kind man with a good heart—the heart she misses most in the world.

“I have to make the very best of the rest of this life that I have, to do something to honor Lukie, helping other people, to make it easier for just one person.”

Lukie was quick to become an organ donor when he got his license. Melinda remembers him saying, “Sure, what would I need my body for?” Of course, it didn’t seem then that his heart—or any other gift he could give—would be needed for a long, long time.

An end and a beginning

When Melinda met Dave, he was starting to feel like a normal person again. “With congestive heart failure, you feel like you’re drowning,” he remembers. He couldn’t visit any friends of his who lived up a flight of stairs, he couldn’t carry anything, he would try to cough up the imaginary water he felt was choking him all the time, but there was no escaping it. His heart was just sick and wasn’t getting any better.

“With congestive heart failure, you feel like you’re drowning.”

Dave used a left ventricular assist device for awhile, which runs on a battery that you have to be sure to charge. Once, on a road trip with a friend, he woke up at the hotel with the device’s alarm going off—his friend had turned off the lights and, not knowing he was doing it, turned off the power source to Dave’s heart. They laugh about it now, as Dave describes changing the battery effortlessly, due to much practice, while his friend panicked.

But a new heart would be the only thing that would truly improve his life. After several months on the waiting list, he finally got the call.

“When you’re on the list, you’re ready. You’re waiting for a transplant 24/7, but you still have to go on with your life,” he says, remembering the night his life changed forever. “I was in the supermarket buying candy and looking at the Yankees game on my phone when they called me. I was joking around and said “I’m buying a candybar, whaddaya want from me?” She said “Go home, pack your things, and be ready in 40 minutes. A cab is going to pick you up and take you to a landing strip to get brought here. We’ve got a heart for you.”

She’d been told she could reach out to Lifenet Health if she wanted to know specifics about Lukie’s gifts. But even though the pain of her grief seemed to grow every day, Melinda couldn’t bring herself to write the necessary letters.

Almost immediately, she got a response. It was heavily edited—at first, the families and recipients should remain cautious until they’re both sure they want to have any sort of relationship—but it filled her with pure joy for the first time in a long time.

Dave was thrilled at the idea of meeting his donor’s family. He wanted to express how thankful he was and meet the people who had helped make it possible for him to lead such a full life again. Melinda’s husband wasn’t ready quite yet, but Levi and Lukie’s grandmother were up for it, and before they knew it, they’d made a date to have lunch with Dave on his next checkup in Richmond. 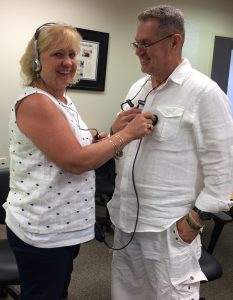 Melinda listens to a familiar heartbeat.

Both parties worried they wouldn’t have much to talk about, but it ended up becoming very simple: “I just wanted to know Dave was OK!” says Melinda. “I wanted to know more about him, what his life is like, and what his plans are.”

Dave understood the family’s emotion. “All my friends say ‘You should be very happy you got this new heart,’ but they don’t understand. I’m not happy—I’m grateful. Happy comes after that. I’m grateful because without Lukie’s heart, I’d have no life.”

Halfway through the visit, a stethoscope was produced, and Melinda was able to listen to the heart she’d loved since the moment she knew it was beating with in her own body. It was there, doing what it’s always done, only giving life to another human being.

“I’m not happy—I’m grateful. Happy comes after that. I’m grateful because without Lukie’s heart, I’d have no life.”

The heart’s new owner is very aware of Lukie’s place in his life, and he tries hard to take care of the both of them by keeping fit and eating well. “I talk to him some. When I’m down, I say ‘Lukie man, c’mon, we gotta do something today.’”

Surprising herself, Melinda’s found that she focuses on who Dave is and not as much on the heart he has inside him. It comforts her to love Dave as his own individual, and she made sure he knew he always has a place in her family. They exchange messages, that Melinda reads out loud to her family, and they interact on Facebook.

“But something positive has to come out of this.”

It’s all been part of Melinda’s promise to stay positive. Her grief is still very much within her, every day. “But something positive has to come out of this,” she kept thinking. “Because he was my child, so it just had to.” Knowing that her own tragedy meant that Dave’s life has been so radically changed for the better helps motivate her to stay an active advocate for organ and tissue donation, as well as suicide prevention. If she can be a comfort to others the way that people like both Lukie and Dave have been a comfort to her throughout her life, then that’s what she will be.

“I’ve always woken up feeling grateful,” Melinda says. “There are so many people to feel grateful for.”

The lives of your fellow Virginians could be changed in just a few minutes—the time it takes for you to #SayYES, and sign up to be a donor here: https://www.donatelifevirginia.org/sign-me-up/