One more day: Richmond toddler waits for a heart

Twin brothers Stonewall and Hawkeye aren’t your average set of toddler twins—they follow each other around like other little boys, each trying to run as fast as the other, and each collapsing happily into the arms of their doting parents. They’re not aware that every time the phone rings, the adults in the house think, “Could this be the call we’ve been waiting for?” 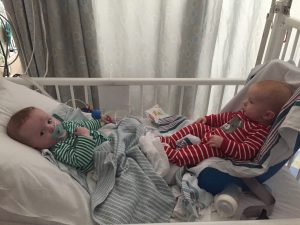 Stonewall was diagnosed with hypoplastic left heart syndrome while he still shared a womb with his brother. Essentially, the one-year-old has only half a heart. It’s doable for some bodies,  a skilled team of surgeons can convert the body’s circulation to work differently. In fact,  an HLHS patient can sometimes get by into middle age without needing a medical transplant.

That’s what parents Ashton and Rick Chappell were hoping when they got the news. A week after his birth in June 2016, Stonewall experienced his first open-heart surgery. Four months later, he had his second. Both times, his medical team was amazed at how well he recovered—a happy baby ready to move along with his life.

Then he caught a cold in April 2017, and recovery stopped progressing so quickly. Stonewall went into heart failure because his tricuspid valve wasn’t functioning properly. The valve is both delicate and important, and there’s really no surgical solution that will repair it for the long-term—so nine months after their little boys were born, Ashton and Rick found out that one of them would officially appear on the transplant list.

For his family, life has been a careful dance of mitigating risk (no play dates, no busy public spots, no hanging out with friends or family who have any sort of contagious illness), trying to get the most out of each day, and nurturing each other’s faith. And overtop of it all there’s the thick, unmovable blanket of waiting. 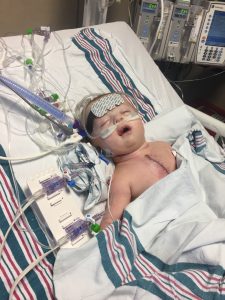 “Waiting is incredibly hard, it’s stressful and draining,” says Ashton, who stays at home with the boys—not just because of the risk to Stonewall’s life that the germs of a daycare would pose, and not just because she has to monitor him for signs that his heart’s in trouble, but because she relishes the opportunity to be present for as many minutes as possible.

A former medical assistant married to a firefighter, Ashton is well aware that life is a precious commodity that can’t be taken for granted. She’s learned over the past year that watching her boys play and taking joy in their little successes eases the tension of listening for the phone and the loneliness that sometimes creeps into a semi-quarantined life. Hawkeye took some steps, so now Stonewall wants to take some steps. Children motivating other children might be the best physical therapy there is, and she lets those moments push the anxiety into a corner.

Ups, downs, and everything in between

Still, the family’s bags are packed and ready to go, the moment the call comes. Ashton and Rick have gotten used to parallel blessings and disappointments: Stonewall’s heart is responding so well to the medication he’s taking that it puts him lower on a list that’s ordered by urgency. Their families have been incredibly supportive, but they have to be thoroughly vetted for possible illnesses before they can enter their home. Ashton adores staying home—particularly with another child on the way—but she won’t be able to go to medical school for many more years like they’d planned, since even after Stonewall’s transplant, she’ll need to home-school him in a germ-free environment where she can keep an eye on him (small boys aren’t known for their careful risk-assessment before plunging into a dangerous situation).

The hardest paradox is the one every waiting-list family has to accept. A gift of life means that somebody else dies. 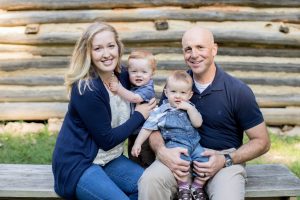 Ashton and Rick with their twin sons, Stonewall and Hawkeye.

Ashton and Rick have decided to open their own hearts to who they call their “future donor family.” Every day that Stonewall doesn’t get his new heart is a day that his parents have figured out how to celebrate—it’s one more day the future donor family gets with their little baby. “One more day they can make memories that will last them forever,” as Ashton puts it.

“One more day they can make memories that will last them forever.”

With all this time to wait and pray, they’ve achieved clarity on so many things. For one, Ashton and Rick have decided that It’s not worth wishing their children’s young lives away by keeping an eye on the two-year-old deadline (at around age two, a body starts to develop antibodies that make organ rejection more likely). Time spent obsessing over things they can’t control is time that’s not devoted to pondering the miracle of his very existence. 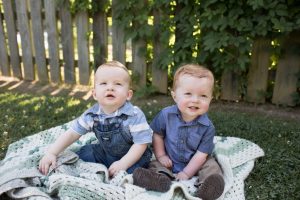 “What other choice is there?” says Ashton about her decision to stay positive. “Not get out of bed in the morning? Not take care of your kids? This has been the biggest faith-growing experience for both of us, because we aren’t in control.” At times, she feels both humbled and exhilarated—turning Stonewall’s fate over to God is difficult, but it frees her up to give more attention to her kids.

When the call does come, they’ll be ready. And the best-case scenario is as simple as seeing Stonewall keep up with Hawkeye. “I want him to experience life to the fullest, with 100% energy and oxygen,” she describes. It’s not their reality yet, but it’s coming.

You can save up to 8 lives and heal countless others. Sign up to become an organ donor.