Chaunta Chalmers did what she always did while Jasmine was in the hospital last year: she looked at her little girl (far too little, in fact—a teenager trapped in an eight-year-old’s body) and said, “We’re going to do the best with what we have. We’re going to make the best of a bad situation.”

The family was waiting on a new heart as Jasmine’s health plummeted, despite six open-heart surgeries and four cardiac catheterizations over the course of her short life. Her first, at three months, came after it was discovered that the infant girl had an unbalanced atrioventricular canal. In short, her heart only had one pump.

On December 12, just a few weeks after sharing her story on Lifeline, Jasmine got her new heart.

It was a true gift for the family, whose last several years had been split between the Children’s Hospital of the King’s Daughters in Norfolk to University of Virginia in Charlottesville. The time apart from each other and the dwindling paid leave Chaunta had left was starting to wear the family down. Sure, Jasmine had a heart, but there was still a ways to go until life could achieve some semblance of normality.

Christmas loomed, but the Chalmers gave little thought to it. Making the best of a bad situation sometimes means not trying to tempt fate and being grateful for what you have. Right now, they had a daughter who was on the mend. Anything else was just icing on the cake. 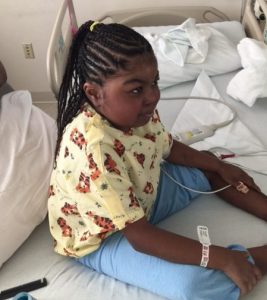 Jasmine recovering in the hospital.

An outpouring of much-needed support

Soon after her surgery, the Suffolk Herald and the Virginian Pilot picked up Jasmine’s story, and people were transfixed by the cheerful, tiny teen who smiled brightly into the camera despite a life harder than many full-grown adults will ever experience. The phone began to ring.

First, Chaunta’s coworkers at the Virginia Department of Social Services presented hundreds of hours of volunteered leave hours for her to use to stay close with her daughter and not lose the wages her family needed.

Then, the officers at the Sheriff’s office put their heads together and came up with a plan to shop for the whole Chalmers family for Christmas.

Suddenly, it seemed like the rest of the community was wrapping their arms around Jasmine and their family. Their church raised a “love offering,” and Jasmine’s middle school’s guidance team organized a fundraiser that captivated her fellow students’ attention. The school was festooned with paper hearts, and a palpable buzz of excitement grew among the children. When the school announced the raised total, they also announced the even bigger news: Jasmine was getting her new heart. One counselor described the students’ reaction as a roar the got louder and louder as realization dawned. 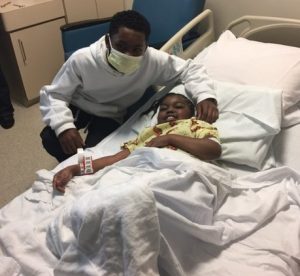 Jasmine with her brother, Jordan.

And it wasn’t just the people who knew Jasmine or even lived in her community in Norfolk. A family in Charlottesville near University of Virginia read about the Chalmers and knew firsthand how extended stints in the hospital can deprive a family from the support they receive from each other. They donated an entire house that the Chalmers could all live in together, close to the hospital, while waiting for Jasmine to return home.

But of course, it was the ultimate gift from a stranger that proved the most dear: the anonymous donor of a heart. Chaunta struggled at first with her conflicting emotions—relief that her daughter would live, excitement that Jasmine might get to experience the world the way a healthy teen can, and grief for a family she’d never met who’d just lost their own child, yet made the decision to donate life.

The lives of your fellow Virginians could be changed in just a few minutes—the time it takes for you to #SayYES, and sign up to be a donor here: https://www.donatelifevirginia.org/sign-me-up/