Ishika Govil is one of them. The high school junior just earned the Gold Award – the Girl Scouts’ highest honor – for her work promoting organ donation in Northern Virginia.

Ishika, who attends Thomas Jefferson High School for Science and Technology, received confirmation in early March that her “Recycle Life” project had been accepted for the Gold Award. It’s an honor only about 5 percent of Girl Scouts ever achieve and Ishika had spent much of 2017 working on the project.

Inspired in Driver’s Ed
“The first step is to choose an issue,” she said. “I saw a TED Talk about organ donation in my driver’s education class and they said 22 people die every day waiting for an organ transplant.”

The reason her driver’s ed teacher showed an organ donation TED Talk in class was simple: since most people sign up as organ donors when they apply for a driver’s license, schools are required as part of Virginia SOL to educate teens before they are confronted with the question at DMV.

“I went to Donate Life ambassador training and I talked to a lot of organ recipients.”

“I didn’t have any specific experience with organ donation,” Ishika said. “I didn’t know anyone who was a recipient, I was just really struck by that TED Talk. My teacher provided the initial data and I started researching it. Then I went to Donate Life ambassador training and I talked to a lot of organ recipients.”
Ishika decided to do outreach, primarily to other teenagers. She created organ donation posters for the local DMVs, library and doctor’s office, but most of her outreach involved social media.

Help from a social media giant

“My biggest obstacle was the fact that most of my communication happened over email,” she said, explaining that her first major goal was to get Snapchat executives to provide a filter for free. “When you email someone, you never know when they’re going to respond or if you should email them another time.” 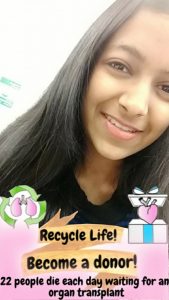 Ishika negotiated a donation from social media giant Snapchat to allow free use of her geofilter.

Eventually, she and Snapchat worked out an arrangement with the social media giant giving her local filters for Thomas Jefferson, Chantilly and Oakton high schools in Fairfax and for Rock Ridge in Loudoun County.

Ordinarily, Oakton alone would have cost $30 or $40 for one day but Snapchat donated two days at all four schools.

From there, Ishika sent out snaps promoting the Recycle Life idea.

Snapping up views on social
It worked. Her snaps were seen almost 2,000 times and the people who viewed them used her message themselves 15.2 percent of the time they sent their own snaps.

She also created an Instagram account and sent out pictures asking students to text her with questions or concerns about signing up to be an organ donor.

“I was able to dispel a lot of myths that way.”

“I was able to dispel a lot of myths that way,” she said. “Some people texted to say they thought their religion wouldn’t allow it so I was able to tell them that every major world religion supports organ donation. Someone also said they’d heard that people who have more money or a higher income get placed higher on the list for organ transplants. That’s not true either, and they don’t look at race or gender. The only things they consider are blood type, age and health.”

A new generation of leaders
Elizabeth Escovar at the Washington Regional Transplant Community worked with Ishika on the Recycle Life project. While Elizabeth’s outreach role puts her in contact with students often, Ishika’s project was a step up.

“High school students have a lot of questions when it comes to understanding organ, eye and tissue donation.”

“I thought it was great and definitely a project that would set her apart from the rest,” Elizabeth said. “In my experience, high school students have a lot of questions when it comes to understanding organ, eye and tissue donation and while the subject is usually received in a positive manner, not many focus on this subject for a project.”

By using social media, Ishika targeted a younger demographic that most organ donation ads and PSAs don’t hit. That’s especially critical since a large high school like Oakton can easily send 500 students a year to the DMV for driver’s licenses.

But the best thing for Ishika wasn’t the virtual outreach, but the personal outreach.

“I really liked people coming up to me talking about the posters they’d seen in DMV or at the doctor’s office,” she said.

According to Elizabeth, Ishika had to work through Donate Life Virginia and the Department of Motor Vehicles to get her posters approved. The visual reminder hanging in the lobby is especially important since 98 percent of donors register at DMV, Elizabeth said.

And although she’s already received word that her Gold Award is on the way, she’s scheduled a presentation for her class during National Donate Life Month in April.

In addition, she hit the traditional media as well, writing an op-ed piece for Northern Virginia’s Connection newspapers that was published in March 2018. 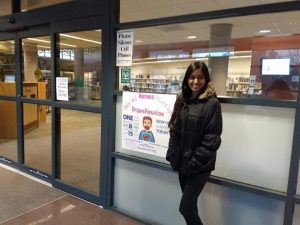 Ishika standing next to her campaign poster.

“As you read this, people are dying,” her article begins. “When you go to bed tonight, after a long day of having fun and relaxing with your family, the lives of the family members and friends of 22 people will be turned upside down. What if I told you that these deaths are easily avoidable? What if I told you that you have the power to stop them?”

Ishika said she’s spent about 117 hours on Recycle Life so far and it’s been a rewarding experience – even before she found out her Gold Award is on the way.

And for the older generation working to educate the public and increase organ donation, Ishika’s Recycle Life campaign, and her social media approach, offers a new way to reach Generation Z before they’re asked to check the organ donation box.

You don’t have to be a Girl Scout to support the cause. Join the Donate Life Virginia community and help us spread the word!