Alexandria mom and gold medalist returns to the US Transplant Games

Three years ago, as Mother’s Day approached, Lea Dozier was having trouble just getting through the day.

At 36, the mother of two had failing kidneys so she spent four hours a day, three days a week in dialysis, in between her days at work.

“It was tough for my children, seeing their mommy going through that,” she said. “I wasn’t good following treatment. I was exhausted. They saw how hard it was.”

“It was tough for my children, seeing their mommy going through that.”

Today though, as Mother’s Day approaches, the Alexandria resident is making plans to take her family to Salt Lake City to watch her compete in the 2018 Transplant Games.

Her good health is due to a kidney transplant, courtesy of her sister. Three years after the operation, she’s back to exercising, working and parenting.

Young and healthy – except …
In 2014, Lea was working as a civilian at the Department of Defense and was enjoying time with her husband John and their 13-year-old daughter and 10-year-old son. She was in good shape, taking the stairs instead of the elevator, playing sports and spending time outdoors.
Except it was getting hard just to take the steps. Lea noticed she was winded too easily and was feeling tired after even a little exertion.

“I wasn’t feeling well but I was a young person and I thought it was just a phase of getting older,” she said. “I thought it would pass if I focused on my diet and exercise.”

“I thought it would pass if I focused on my diet and exercise.”

But it kept getting worse. She’d had thyroid cancer 10 years earlier, so a routine visit with her endocrinologist, she discovered that her blood pressure was at stroke levels. The doctor told her she needed to see her primary care doctor immediately. Her physician tested her kidneys and said they weren’t good and that she needed more testing. It was serious enough that the doctor pulled some strings to get her an appointment right away with a nephrologist. After more extensive tests, the nephrologist found that she had only 28 percent kidney function left.

“But they said ‘you’re young, you’re healthy otherwise and we don’t talk about dialysis until your kidney levels are in the teens,’” she said.

A biopsy found that her kidneys were scarred and although the reason was unclear, doctors felt medicine could reverse the effects.

“You know it’s serious when they tell you to come in now.”

“The medicine was awful,” she recalled. “The side effects were bad and I didn’t feel good but it didn’t matter what they put me on because it didn’t reverse anything. It didn’t work.”

She didn’t realize just how badly it didn’t work though, until she and John took a trip to Paris at the end of 2014. She returned home in January 2015 and went in for more tests.The results came in the form of a call from the specialist saying she should come into the office immediately.

“You know it’s serious when they tell you to come in now,” she said.

In two months, her kidney function had dropped to 8 or 9 percent.

“The international trip, the travel, with all of it – I just declined that fast,” she said.

The only answer was dialysis and it was an emergency. 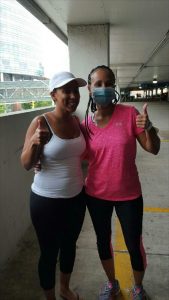 Lea received a kidney from her sister, Angela.

She spent Monday, Wednesday and Friday at work and Tuesday, Thursday and Saturday in treatment.

“It was the worst time of my life.”

The gift of life
But there was a light at the end of the tunnel. Lea had a large family and several of her sisters were matches. Her youngest sister, Angela, was the best fit and on June 30, 2015, they went in for the transplant.

Lea felt better right away and within a month and a half, she was back into her exercise regimen. Nine months after the transplant, she competed in basketball and the 5K at the 2016 Transplant Games in Cleveland.

“We won a gold medal in basketball,” she said. In the 5K, I was just trying to complete the course but I placed second in my age group.”

On to Salt Lake City

“It’s like any other sports competition,” she said. “The only difference is that everyone’s had a transplant.” 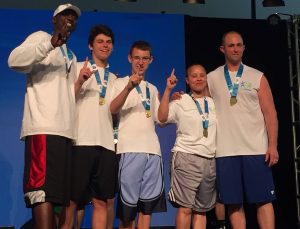 Lea Dozier wins the gold at the 2016 Transplant Games.

The transplants make a difference because it sets a slower pace for most athletes.

“My new normal is immunosuppressants for life,” she said. And I’m pushing 40. I’m getting older and I’ve got aches and pains. I don’t recover as fast as I used to.”

That’s not just age. Transplant recipients don’t always heal as fast as others. In some cases, a bruise can take weeks or months to heal so even minor sports injuries can be major.

“I’m looking forward to it, though,” she said. “We’re planning to take the whole family.”

Check the box
As for her kids, they’re following in their mother’s footsteps in the world of sports. Her son, now 13, is in middle school and is very into sports. Her daughter just turned 16 and is a cheerleader and a sophomore in high school.

“We’ve talked to my daughter about checking the box for organ donation when you get a driver’s license.”

“We’ve talked to my daughter about checking the box for organ donation when you get a driver’s license,” Lea said. “When I was 16, I checked the box automatically. I didn’t know anything about organ donation or kidney transplants but if you can save someone else’s life, you should do it.”

Lea said she’s forever grateful to her sister, and is amazed by the countless people who donate living organs to friends, relatives and strangers.

“It’s so selfless,” she said. “There’s no greater love. It’s a second chance.”

The lives of your fellow Virginians could be changed in minutes—the time it takes for you to sign up to be a donor. Click here and save a life.