‘The Day My Life Changed’: Honoring Andrew at the Tree of Life

Published on December 5, 2016by Kelly Vance

At the age of 27, Andrew Meadowcroft’s final act in life was to save four people and give sight to two others. On December 1, his mother, Lori Burda, spoke of her son’s life-saving gift of organ donation as she hung the first ornament on the Tree of Life at the United Network for Organ Sharing (UNOS).

“He was a father and husband,” she said before the ceremony to honor organ donors. “He loved to hunt and fish and he had a great sense of humor and a beautiful smile.”

Andrew was a 2005 graduate of Lee Davis High School and had been a registered organ donor since he’d gotten his driver’s license. When he was killed in a 2014 motorcycle crash, his wife and family took comfort in knowing that Andrew had already made the important decision to be an organ donor.

He was a father and husband. He loved to hunt and fish and he had a great sense of humor and a beautiful smile. 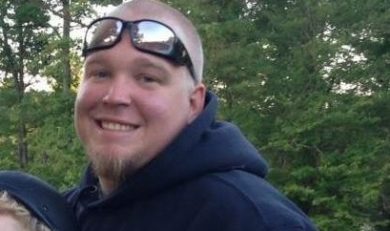 It was a difficult time but not a difficult decision, Lori said. She and Andrew and his older brother Christopher had always been organ donors and Andrew’s gift of life has helped them all to cope with his death.

Lori was asked to tell Andrew’s story at the Tree of Life ceremony, where she and hundreds of others gathered to honor the kindness and generosity of donors and to bring hope to those on waiting lists for organ transplants.

From one tree to three

Made possible with support from Donate Life Virginia, Old Dominion Eye Foundation, and LifeNet Health, Tree of Life ceremonies are held all across Virginia this time of year. The holiday season is an especially difficult time for grieving families, said Lisa Schaffner, spokesperson for the UNOS.

“This remembrance really helps them to know that their loved ones are living on through others,” she said.

The Tree of Life ceremony at UNOS began in 2005 and originally featured only one tree. The family members of organ donors who had died in the last year brought special ornaments and as each donor’s name was read, a loved one placed the ornament on the tree. The ornaments hung for about a month and were individually wrapped and stored until the next year.

That was more than a decade ago, Lisa said. Since then, the ceremony has grown so that three separate trees are now needed to accommodate 11 years of ornaments plus the new ones being hung for the first time.

That’s the year my life changed,” Lori said. “It has his picture in black and white and the year 2014. The first Christmas, I couldn’t even look at it.

Seventy names were read and 70 new ornaments hung this year, Lisa said. They are the names of organ donors who had died in the last year and whose family members wanted them mentioned. As each name was read, a family member came forward to hang their ornament on the tree.

“These are not just typical ornaments,” Lisa said. “These are ornaments that have significance to the family and the person who died. They’re beautiful ornaments.”

‘The year my life changed’
As a featured speaker, Lori was the first to hang an ornament – one a close friend made when Andrew died just before Thanksgiving in 2014.

“That’s the year my life changed,” Lori said. “It has his picture in black and white and the year 2014. The first Christmas, I couldn’t even look at it.”

She also brought with her a drawing she commissioned of Andrew and his son Michael, who was 3 when his father died. “We told him that his father has gone to heaven but he didn’t understand and he kept wanting to call him on the phone,” Lori said. 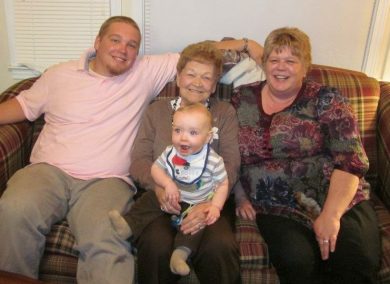 Andrew with his grandmother, son and mother.

Two years later, Michael is doing better. He still doesn’t entirely understand, but knows his father went to heaven and is with Lori’s mother, who had gone only a few months before him.

It’s been two years since her son died and Lori said she’s just starting to come out of the numbness that had set in. She said she wasn’t ready to attend the ceremony just after his death or the first year following, but this year she was ready not only to go, but to serve as a keynote speaker.

“As time goes on, I realize that people need to speak; I need to speak,” she said. “Any opportunity I have to let the world know about him, I take it.”

When Andrew died, just short of his 28th birthday, he was on the way up, his mother said. He had married his high school sweetheart and started work as a cook before deciding to become an electrician. After four years of night school and now with a toddler at home, he sat for the master electrician’s exam, an exceedingly difficult test that most people don’t pass the first time.

Andrew passed it the first time.

“He was so proud and excited,” Lori said.

A few months later, however, his motorcycle crashed, leaving him with a fatal brain injury and a grief-stricken family.

But as he died, Andrew’s last act was to donate his liver, heart, kidneys and eyes and with that gift, he saved four lives and two people’s sight.

A final gift
Through UNOS, Lori wrote to the beneficiaries and has received letters back from most of them. They’re all doing well, she said, and she was especially touched to find that one of her son’s kidneys now resides in a 6-year-old child who had suffered from kidney failure since the age of 2.

As time goes on, I realize that people need to speak; I need to speak. Any opportunity I have to let the world know about him, I take it.

Knowing that her son lives on through six people has helped her through her grief, she said. The gift of life was a fitting one for a young man who had already helped so many people, although Lori didn’t know it until Andrew’s funeral. 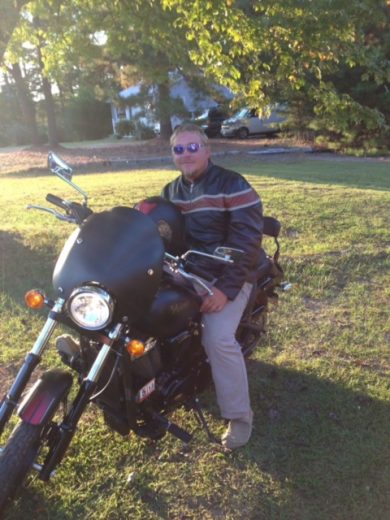 Andrew on his motorcycle.

“I knew he had a lot of friends but the place was packed,” she said. “So many people came up to me and said that he’d helped them turn their lives around.”

Lori said she lost count of how many people told her that they’d been headed for trouble before Andrew had taken them aside and helped them get back on track. It only makes sense that he is still helping people after his death, she said.

“I just want everyone to know what a great person he was,” she said. “He just changed a lot of lives with his friends and the people he met and he’s still changing them now.”

‘More than just words’
After she told her story at the Tree of Life ceremony and hung Andrew’s ornament, she was joined by 70 other donor families, honoring their loved ones’ final gifts as they hung ornaments of remembrance.

After the names of the 2016 donors were read, the families of previous donors had the opportunity to come forward and hang ornaments as well.

At the end, Lori was the one who lit the trees. Everyone in attendance was then given the opportunity to make holiday cards with messages of hope to be sent to people still on the waiting list for organ transplants.

“The event is more than just words – it’s a feeling,” Lisa said. “It really sets the whole holiday celebration in a whole new light.” 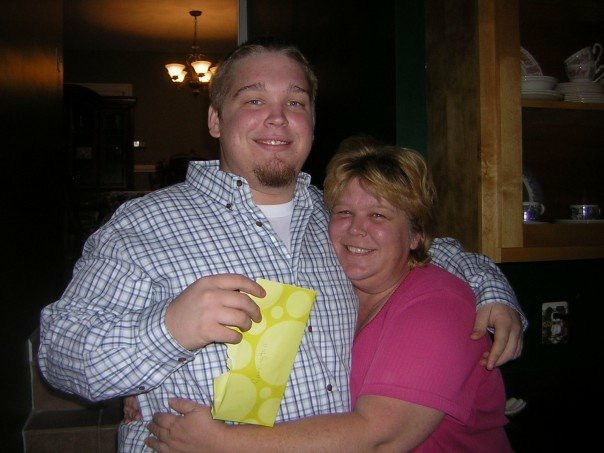